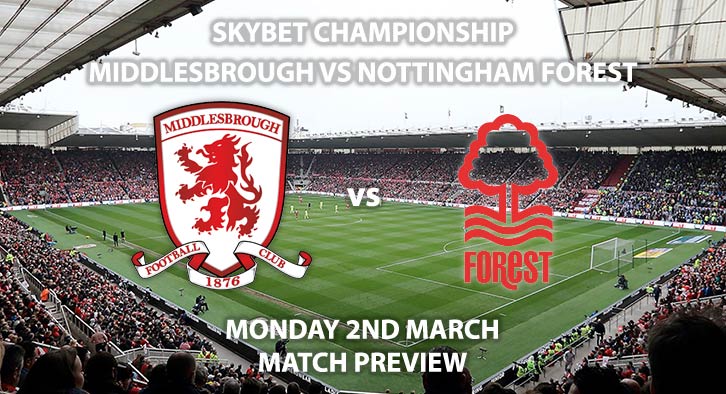 Middlesbrough host Nottingham Forest in the latest instalment of Monday night football in the SkyBet Championship.

Both sides are battling at both ends of the table, and a positive result on Monday evening will enhance either sides bid to achieve their targets between now and the end of the season.

Middlesbrough find themselves stuck in a relegation battle. Johnathan Woodgate’s side sit just above the relegation zone on goal difference alone. The eleven matches between now and the end of the season are huge, and could have a say on his future, as well as Middlesbrough’s.

Nottingham Forest still have faint hopes of sealing their spot in the automatic promotion places- which they currently trail by six points. Sabri Lamouchi’s side are 4th in the division and securing a play-off spot will be their primary aim.

Middlesbrough have failed to win in their last eleven matches in all competitions and have won only once this year. Boro have lost four of their last five and have a tremendous amount of work to do if they are to avoid the drop.

Forest on the other hand are unbeaten in their last three, but if they are to grab 2nd spot, they need to start winning games again. Their win over Cardiff on Monday night was their first in the last three following their blip at the beginning of the month, where they lost two in three.

Forest have won four of the last six meetings between these two. The last meeting in this fixture produces a 1-1 draw at the City Ground in December.

Thiago Silva has scores in two of Forest’s last three away matches, and is priced at 6/1 to score anytime in this fixture on SkyBet.

The referee for this clash is Darren England. England has averaged just over three yellow cards per fixture in his eighteen Championship fixtures this season. This considered, I would recommend a minimum of 20+ booking points for this clash.

Middlesbrough vs Nottingham Forest will be televised live in the UK on Sky Sports Football HD with kick-off 19:45.