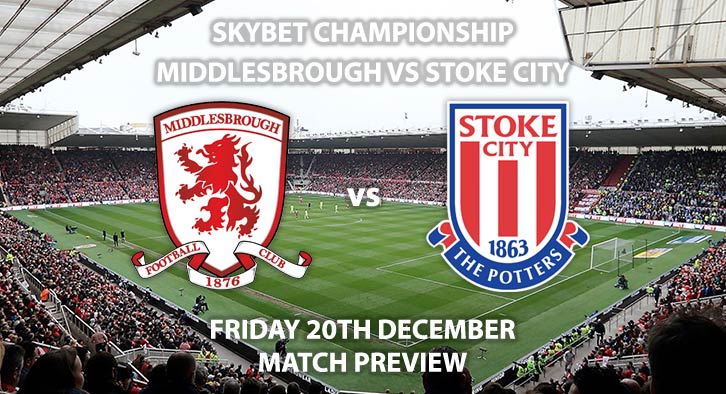 Middlesbrough return to the Riverside on Friday night as they welcome fellow strugglers Stoke City in the Championship.

To say Middlesbrough could do with a win is an understatement. Johnathan Woodgate has seen his side win only four times this season, which has got his side looking anxiously over their shoulder. Boro come into Friday evenings encounter looking for a win following the 3-1 defeat away to Swansea on Saturday.

Stoke on the other hand are adjusting to life under new management following Michael O’Neill’s appointment in November. Since the former Northern Ireland managers arrival, Stoke have won three, drawn three and lost one, which has seen them rise from the foot of the table. The Potters come into Friday’s game on the back of a stalemate, the 0-0 draw at home to Reading.

Boro have won twice in their last sixteen matches, form which that has seen them slip to 20th in the division. Their last victory came at the beginning of the month, where they defeated Charlton at the Riverside. Stoke on the other hand are unbeaten in their last two and have won more matches since O’Neill’s arrival than they managed in their previous fifteen matches.

Middlesbrough currently sit three points and two places above Stoke, but a win for the Potters would see them leapfrog Middlesbrough, and put more space between themselves and the relegation zone.

The last time these two met, Middlesbrough ran out 1-0 winners at the Riverside in April. That win for Boro is their only win against Stoke since 2008, where they were 2-0 winners in what was then a Premier League fixture. Before that last encounter, Stoke were unbeaten in four, drawing two and winning two.

In the last five meetings between these two sides, BTTS has landed once, the last time being in the 1-1 draw in August 2016.

This game will be shown live on Sky Sports football, with kick-off scheduled for 19:45 GMT on Friday evening.