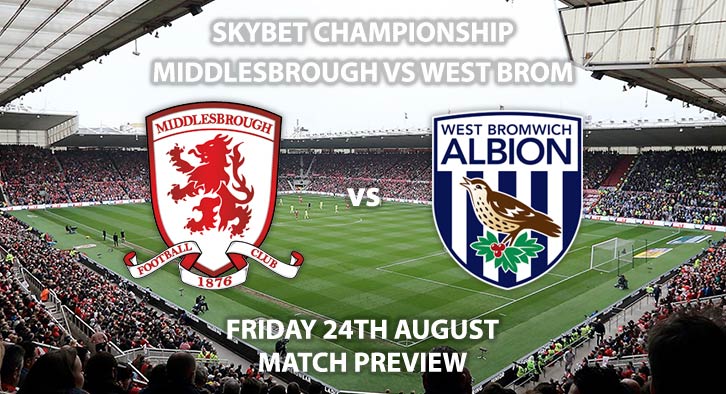 Both sides are in impressive form and victory will help maintain momentum and help further establish a respective favourites tag. Pulis’ has pedigree at this level and the squad has talent in players like Britt Assombalonga and Marcus Braithwaite. (The attacking duo have netted five league goals even at this stage.) Consequentially Boro were strongly fancied pre-season to have a big campaign.

The Wearsiders’ unbeaten start has done nothing to dispel those beliefs. Middlesbrough are second, level on points with 1st place Leeds and have victories over Birmingham, Sheffield United and Bristol City. The opening day 2-2 draw with Millwall was also positive, coming from 2-0 down in the 87th minute to tie.

A similar story with of early optimism with West Brom. After a long and often stable period in the Premier League, last season proved one too many. A positive did come in that after the end was nigh, now manager Darren Moore had a massive impact on the team and the club’s atmosphere.

The positivity is flowing too as The Baggies seek a third consecutive win and a fifth unbeaten in all competitions. Keeping hold of players such as Matt Phillips and Jay Rodriguez could be so beneficial at this level. The pairing already have seven league goals between them, helped massively by the 7-1 battering of struggling QPR.

As is the way in the Championship, this game starts a difficult run of league fixtures for both teams. The Baggies have pre-season favourites Stoke City next before an away trip to Midlands rivals Birmingham City. Middlesbrough’s challenge comes in the form of leaders Leeds and then Norwich away before facing fellow top 6 sides Bolton and Swansea at The Riverside.

Tricky runs elevates the importance of this fixture, to continue the push up the league and lay out early intentions. Come the end of the season one would expect both these teams to be in the mix promotion. Knowing how tight the Championship can be, this game could perhaps make all the difference.

This will be referee John Brooks’ third Championship match of the season. Despite being in early stages, Brooks holds the highest cards and points average per game. This is due to the eight yellows dished out in Bolton vs Bristol City and the six yellows and a red in Stoke’s 3-0 loss to Wigan. Cards are to be expected here.

Middlesbrough vs West Brom will be televised live in the UK on Sky Sports Football with kick off at 19:45.