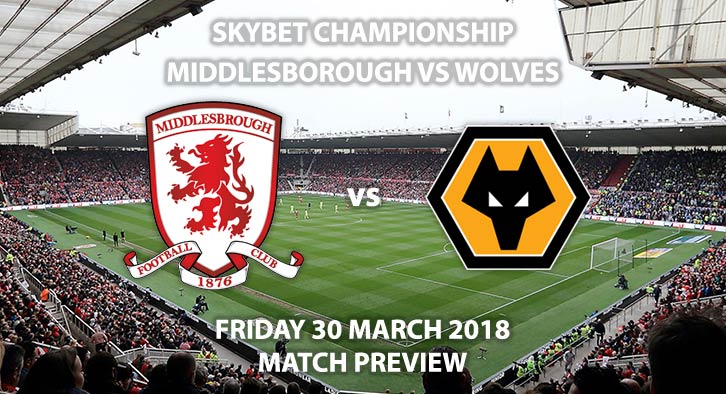 Middlesbrough vs Wolves: Wolves face play-off chasing Middlesbrough at the Riverside on Friday night looking to extend their lead at the top of the table.

After a comprehensive 3-1 win before the international break, Wolves sit six points clear of second-placed Cardiff City. Most importantly for Nuno Santo’s side, they have a 13 point cushion over Fulham who occupy third. Wolves responded to their 4-1 drubbing against Aston Villa with back to back home wins, leaving them in pole position ahead of the Championship run in. Benik Afobe has started their last two league matches and has grabbed three goals. The Bournemouth loanee looks back at home after rejoining his old club on deadline day and his goals could be vital in seeing them over the line. His return to form has come at an opportune moment, given Diogo Jota’s injury. The Portuguese playmaker is likely to miss Friday’s game after sustaining an injury against Reading.

Tony Pulis has lifted Middlesbrough into the play-offs since his arrival. This has been in no small part down to the form of Patrick Bamford and Adama Traore. The former Aston Villa winger has been in sensational form, contributing goals and assists to match his frightening pace and power. This has also correlated with the recent goal-scoring form of Bamford. The 24-year-old has grabbed eight goals from his last six matches. His form has kept out Britt Assombalonga whilst also making up for the injured Ruddy Gestede. Middlesbrough are unbeaten in their last six games and have won three of their last four matches. They haven’t lost at home since January, which has been key to their recent success. Pulis has always been renowned for his defensive prowess. This has been evident in Boro’s form since he arrived. At home, they have conceded just three goals in five games.

Middlesbrough have only lost one of their last five meetings with Wolves. That defeat did, however, come in the reverse fixture on the opening day of the season. Stuart Atwell has been appointed as the referee for this match. The Englishman has only officiated four other Championship fixtures, having spent most of his time in the top flight. In his 13 Premier League matches, he racked up an average booking points total of 39.6, the third highest in the division. Thus, given the added physicality in the Championship, booking points may be a good bet for this match.

Despite being the best team in the division, Wolves have won one of their last four away games. Middlesbrough, by contrast, have been fantastic at home under Pulis. Therefore, I’m opting for a draw in what I expect to be an entertaining contest between two good sides.