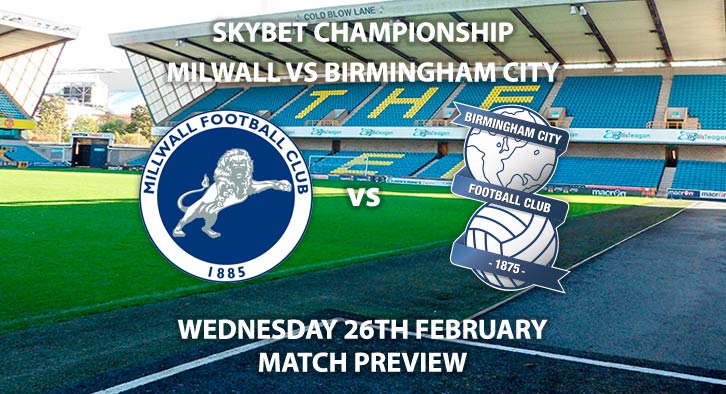 Both sides will be hoping to bounce back with a midweek win following failure to do so at the weekend. Millwall were defeated 1-0 away to Wigan Athletic; a result which could turn out to be crucial for the Latics’ bid for survival, and Birmingham were involved in the pick of the games from the weekend, drawing 3-3 at home with Sheffield Wednesday.

The Lion’s defeat on Saturday was their second on their last five, and saw them miss the opportunity to reduce the gap between themselves and the play-off places. Gary Rowett’s side sit 11th in the Championship, seven points behind Preston who occupy 6th place.

Blues on the other hand have lost only once this year in all competitions, and are arguably one of the more in-form sides in the division. Pep Clotet’s side have strung together an eleven-match unbeaten run in all competitions, and in that time have also secured passage to the 5th round of the FA Cup. Birmingham are unbeaten in their last five away fixtures, stretching back to the middle of December, and have picked up eleven points from the fifteen on offer on the road.

Birmingham’s away form has been tremendous in recent weeks, and SkyBet are offering odds of an away win at 5/2.

The newly formed strike partnership at St Andrews has been nothing short of deadly in recent weeks. Lukas Jutkiewicz and Scott Hogan have both netted four times in their last six appearances respectively, and are priced at 11/1 to both score on Wednesday night.

These two sides last met in November, and played out a 1-1 draw at St Andrews. Millwall have won four of the last six meetings in this fixture, meanwhile Birmingham’s last win came in November 2018, a 2-0 win at the Den.

The referee for Wednesday night’s encounter is David Webb. Webb has averaged under three yellow cards in his nineteen Championship matches this season. The Englishman is also yet to award a red card in any competition this season. This considered, I would recommend a maximum of 40+ booking points for this fixture.

Millwall vs Birmingham City will be televised live in the UK on Sky Sports Main Event with kick-off at 19:45 GMT.