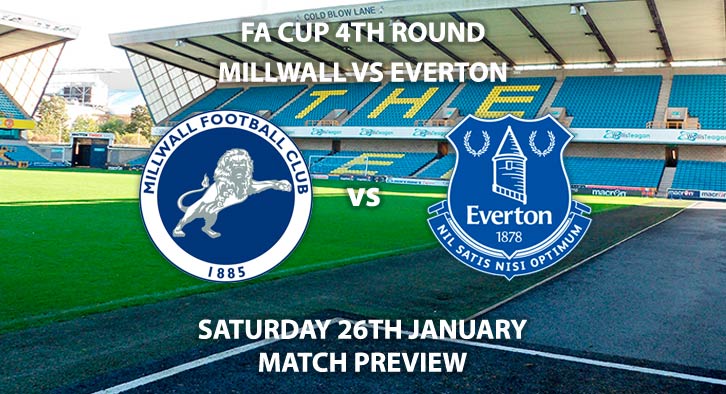 Millwall vs Everton: Everton will be hoping to a shock defeat in the fourth round of the FA Cup when they take on Championship outfit Millwall at the New Den.

Toffees’ boss Marco Silva finds himself under a little bit of pressure heading into this tie. Everton lost 2-1 at struggling Southampton at the weekend and have only won two of their last ten league games. They sit 11th in the table as a result, 11 points clear of the relegation zone. Having spent big money on Richarlison, Andre Gomes, Yerry Mina and Luca Digne in the summer, Silva is starting to feel the heat at Goodison Park. The Toffees are crying out for a centre forward, with Cenk Tosun out of favour and Dominic Calvert-Lewin still just 21 years old. Even so, Everton’s overall play has been lacking recently, which could be down to confidence. They defeated Lincoln in the last round of this competition 2-1 – although even that was an unconvincing scoreline. Silva will be hoping to avoid defeat away at what looks like a potential banana-skin tie.

Millwall have struggled to match their success of last season. They sit 19th in the Championship, six points clear of the relegation zone. The Lions’ strong form last season was built around their impressive home form, although they have struggled a little more this season on home turf. Neil Harris’ side have lost just once in their last five at home in all competitions – a run that includes beating Hull City 2-1 in the last round. The New Den is not an easy place for any side to travel to, so Millwall will be hoping to take advantage of Everton’s dip in confidence and claim a famous FA Cup scalp.

Martin Atkinson is the referee for this fixture. The Englishman has officiated 14 top-flight matches this season. In that time, he has accumulated an average booking points total of 33.9. Therefore, I would advise a maximum of 50+ total points for this fixture.

Everton could really benefit from a cup run this season, with their league campaign dwindling. A confident, assured performance here would help lift the pressure off Silva. Millwall won’t make it easy for them, but I fancy that the Premier League side will have enough to make it through to the fifth round.

Millwall vs Everton will be televised live in the UK on BBC 1 with kick-off at 17:30 GMT.