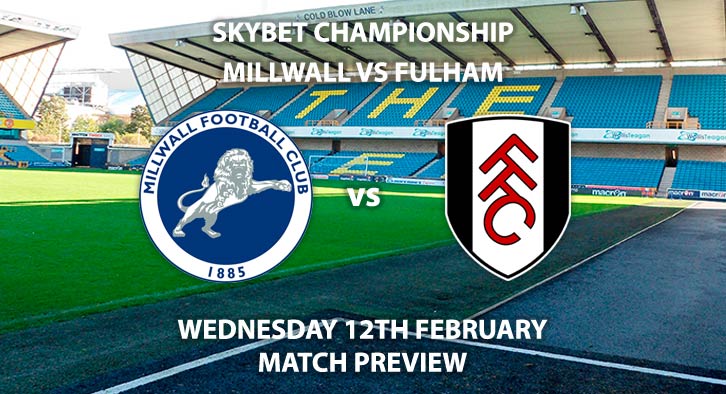 Millwall vs Fulham
Wednesday 12th February 2020
The Championship, The Den

The Lions are winless in their last three league outings but still have their sights set on a potential play-off push. They are currently tenth in the league standings. Meanwhile, Fulham are back in the race for automatic promotion. The Cottagers are unbeaten in five in the league.

Millwall are priced at 2/1 by SkyBet to win the match and build their play-off bid with an impressive victory. Gary Rowett has made Millwall a real force to be reckoned with, but they’re struggling to get a run of results together. However, they have won three of their last four home Championship matches.

Going forward, Jed Wallace has been in fine form with ten goals and nine assists to his name. He is priced at 23/10 to score anytime.

Fulham are priced at a very tempting 7/5 to win the match as they hunt down Leeds and West Brom for a place in the Premier League. Scott Parker’s side have hit form at the right time – whilst West Brom and Leeds have been struggling. They are great at keeping possession and are now utilising their star striker.

Aleksander Mitrovic has scored in both of his last two matches to take his season’s tally to 20 goals. He is priced at 6/4 to score anytime.

The referee for this match will be Andy Madley. The official has really not been shy when reaching for his pocket this season and has an average of 51.7 booking points from his six second division matches in charge.

– It will be a tough match but the visitors attacking prowess will find them that moment of magic.