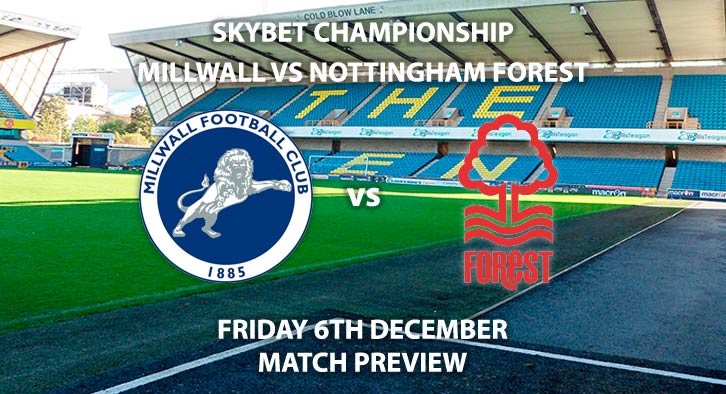 Friday night football returns to the Championship this week as Millwall welcome Nottingham Forest to the Den.

The Lions will be looking to return to winning ways following two consecutive stalemates, most recently the 1-1 draw away to Birmingham.

Their opponents Nottingham Forest will themselves will be looking to claim a win, after failing to do so in their most recent game at home to Cardiff. Last Saturday’s defeat to the Bluebirds was their fourth defeat of the season, but alarmingly, their third at home. Sabri Lamouchi will be expecting his side to improve their home form if they are to turn their promotion dreams into a reality.

Prior to the defeat to Neil Warnock’s side, Forest were unbeaten in their previous four; winning three and drawing the other.

Millwall will be hoping to continue their strong recent form against Forest with another win on Friday evening. The Lions are unbeaten in their last three against this week’s opponents, winning two.

The reverse fixture last season at the Den saw Millwall claim all three points thanks to Ryan Tunnicliffe’s early winner. SkyBet are offering odds of a repeat scoreline at 6/1.

The referee for this fixture is John Brooks. The 29-year old has taken charge of ten Championship matches this season, accumulating a total of thirty-two yellow cards. This considered, I would recommend a minimum of 20+ booking points. Brooks is yet to oversee a game including Nottingham Forest, but took charge of Millwall’s 1-1 draw with Middlesbrough, where he awarded two yellow cards.

This match will be shown live on Sky Sports Football, with kick-off scheduled to take place at 19:45 GMT.