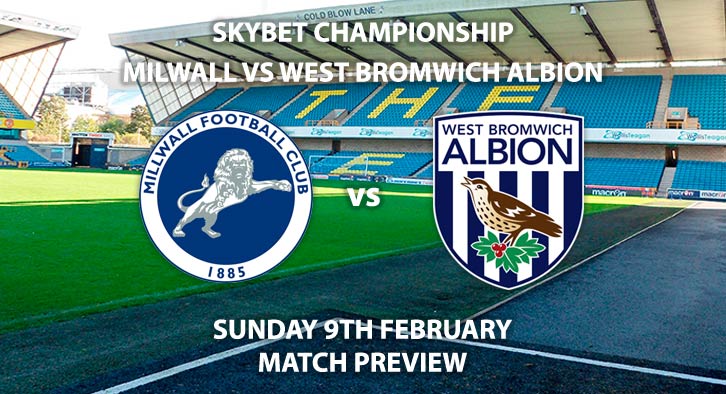 The Lions are enjoying a decent season under Gary Rowett and are currently ninth in the league table pushing for a play-off place. Meanwhile, West Brom are top of the league and hoping to turn around their recent poor domestic form.

Millwall are priced at 19/10 to win the match by SkyBet and pull off a shock victory and turn their form around. The hosts are in good form with two wins, two draws and one loss from their last five outings in the second division. They are outsiders for the play-off places and are just five points behind at this stage.

They battled out a 0-0 draw with Sheffield Wednesday last time out in an impressive showing but may have their work cut out for them this Sunday. Going forward, Jed Wallace has been the club’s main man with ten goals and nine assists. He is priced at 23/10 to score anytime.

West Bromwich Albion are priced at 6/4 to win the match and potentially build on their lead at the top of the table. The Baggies are still top of the table despite a recent poor run of results. They managed their first league win in eight matches against Luton last weekend and will want to build on it with Leeds United on their heels.

Charlie Austin has been displaying his talent this season with eight goals to his name and is priced at 11/5 to bag anytime.

The referee for this match will be Kevin Stroud. The official has been one of the harshest this season in the second division with an average of 41.9 booking points from his 16 matches in charge.

Millwall vs West Bromwich Albion will be televised on Sky Sports Football HD and kicks off at 13:30.

– The visitors will have too much quality going forward despite the hosts home advantage.