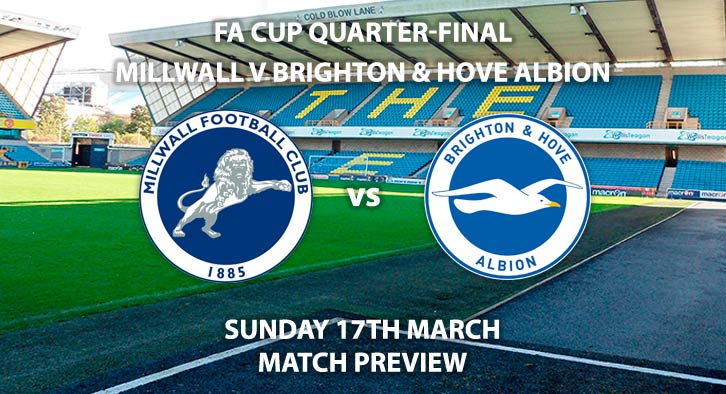 Millwall will meet Brighton in FA Cup action this Sunday with a place at Wembley the prize.

The hosts narrowly defeated AFC Wimbledon in the last round to reach the quarter-finals. Meanwhile, Brighton saw off Derby County thanks to two first-half goals.

Millwall, one of the two Championship sides left in the competition, are priced at 13/5 to win by SkyBet. The London based club have not been too convincing in this competition despite reaching this stage. All of their matches have been decided by a one-goal margin. Their most prolific scorer this season has been Lee Gregory with 12 goals in all competitions. The striker will provide an aerial threat for the hosts and is priced at 12/5 to score anytime.

One statistic Millwall will want to keep running is their record against top-flight clubs in the FA Cup. They have won their last five matches against Premier League opposition and are 5/1 to win to nil.

Brighton are favourites for the tie and are priced at 11/10 to win in 90 minutes. This is the second successive season that Brighton have reached this stage of the competition. Their recent form should give them some confidence with three wins from their last five matches. Glenn Murray scored yet again for the Seagulls in their previous outing and could be pivotal is the visitors are to score and is 5/4 to score anytime.

Brighton manager Chris Hughton has a great record against Millwall with two wins and one draw. They are 5.2 to win to nil.

The referee for this match will be Chris Kavanagh. The official has been a regular in the Premier League this season and has averaged 35 booking points per match in the top-flight. With a place in the semi-final up for grabs, it could become a feisty encounter. 50+ booking points is priced at 6/4.

Millwall vs Brighton and Hove Albion will be televised on BBC One and kicks off at 14:00.

– The away sides quality and attacking prowess should be too much for the home side.

Odds and markets last updated on Sunday 17th March 2019 @09:47 GMT. Keep checking back to see if there’s any updates to markets – the time stamp in the previous sentence for when we update tips on this page will be updated.