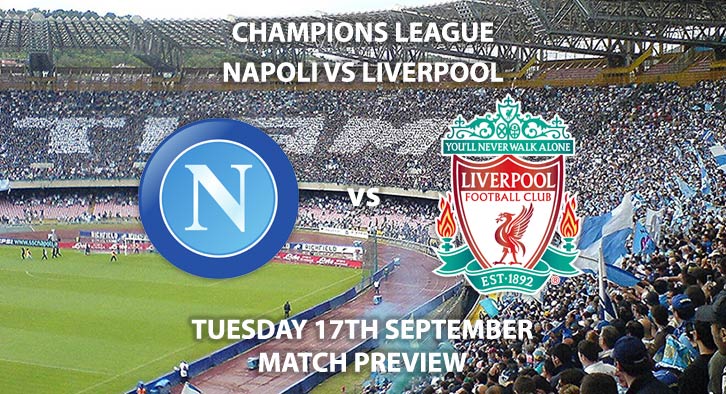 Champions of Europe Liverpool begin the defence of their Champions League crown with a trip to Italy as they face Napoli on Tuesday evening.

Jurgen Klopp’s side enter the 2019/20 Champions League campaign as the reigning Champions, following their 2-0 victory over Tottenham in Madrid in June.

However, Tuesday nights fixture is by no means an easy task for Liverpool. These two sides faced each other in the group stage of last year’s Champions League, where Carlo Ancelotti’s side were 1-0 winners thanks to a last-minute goal from Lorenzo Insigne. Both these two sides are the favourites to make it through Group E, a group which is completed by Genk and Red Bull Salzburg.

Liverpool extended their unbeaten 100% record in the Premier League this season following Saturday’s 3-1 victory over Newcastle United, a match where a dazzling display from Liverpool’s Roberto Firmino made the headlines. The Brazilian to score, and Liverpool to win is priced at 16/5 on SkyBet.

Napoli on the other hand have enjoyed a positive beginning to this years Serie A campaign. Gli Azzurri have picked up two wins from three matches played, their only defeat coming in the last minute in the 4-3 defeat to Juventus. In the three matches played in the league, Napoli have scored nine goals, and goals are expected on Tuesday night. Napoli to score 2+ goals is priced at 5/4 on SkyBet.

The last time these two sides met was in December of last year, where a Mo Salah goal was enough to send Liverpool through to the knockout stage of the Champions League at Napoli’s expense. A result which proved to be so pivotal in The Red’s Champions League triumph. A repeat scoreline is priced at 9/1 on SkyBet.

It is so important to get off the mark as early as possible in Champions League football. Both sided will fancy their chances to win but will be wary of what defeat could do to their qualification chances, even this early on. Napoli have been involved in two 4-3 goal fests already this season and have proved that they can score just as easily as they can concede. Against this Liverpool side, with the attacking prowess it possesses, they cannot afford to leave themselves so open and exposed. I fancy Liverpool to get the win, and I am expecting goals too.

Napoli vs Liverpool will be televised live in the UK on BT Sport 2 and kicks off at 20:00 BST.