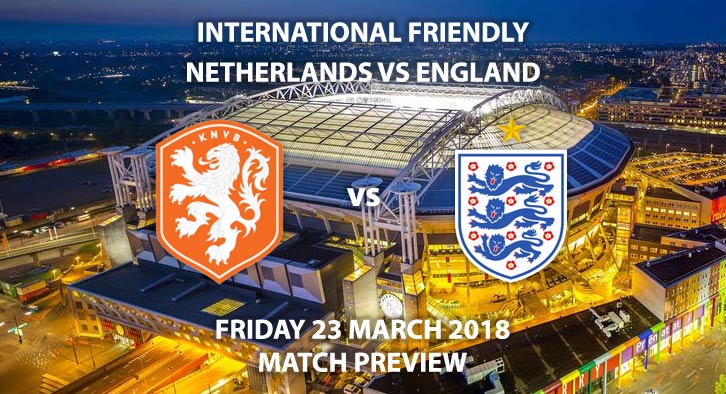 Netherlands vs England – England take a trip to the Netherlands as they face Holland in a friendly ahead of the upcoming World Cup in Russia.

Gareth Southgate will shape his England squad for Russia in the three lions’ upcoming matches. Whilst there are a few players missing out through injury, a large portion of this squad still have to prove their worth. The goalkeeping department has, in particular, been an area under scrutiny. Consequently, Burnley goalkeeper Nick Pope earned his first call-up for these games after an impressive season in the Clarets’ net. The number one spot is up for grabs after Joe Hart’s poor form at West Ham, with Jordan Pickford and Jack Butland the main two contenders. I personally believe Southgate will opt for the Stoke stopper to guard England’s goal.

Whilst many speculating on England’s formation for the upcoming tournament, I expect Southgate to stick with his preferred 3-4-3 formation. The England manager has already intimated he will use Eric Dier in the back three for these matches, a position he has played for Spurs previously. Alfie Mawson and James Tarkowski have both been given a chance to impress following their first call-ups. More experience defenders Gary Cahill and Chris Smalling left out. Upfront, Marcus Rashford and Jamie Vardy have the chance to stake their claim for the World Cup with Harry Kane absent through injury.

Despite not qualifying for this summer’s competition, Holland have won their last five games. Having missed the last two major tournaments, new manager Ronald Koeman has been tasked with running the country’s fortunes around. They finished level on points with Sweden in group A but missed out on goal difference. With a number of up and coming young players in their ranks, the future looks bright for Dutch football. Virgil van Dijk should captain the side alongside Stefan De Vrij, whilst Quincy Promes, Bas Dost and youngster Justin Kluivert will be expected to cause England problems in attack.

Jesus Gil Manzano will referee the clash on Friday night. The Spaniard plies his trade in La Liga, where he has averaged 5.87 cards per game across 15 league matches. This consists of 86 yellow cards and one red, which therefore means booking points could be a good option for Friday’s game.

Without Harry Kane, England will be looking for Rashford to step up to the plate. Holland also pose a threat and will want to prove their worth under a new manager. Thus, I think this will end in a draw, with neither team wanting to lose the game.

Netherlands vs England will be televised live in the UK on ITV with kick off at 19:45 GMT.

Keep visiting the tips and preview area for further updates and betting previews for more previews from the International break.