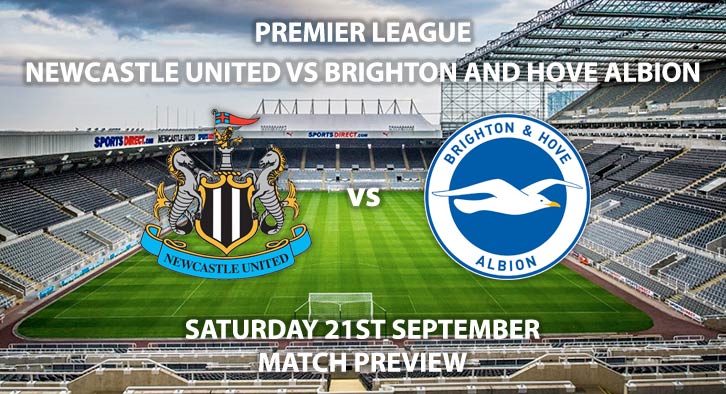 Newcastle United return to St James’s Park as they face Brighton and Hove Albion in the Premier League on Saturday tea time.

The Magpies come into this fixture off the back of defeat to league leaders Liverpool and will be looking to put things right on home soil. Their opponents Brighton drew 1-1 with Burnley last time round, following Jeff Hendrick’s last-minute equaliser. Brighton began the season with victory against Watford but are without a win in their last four Premier League fixtures.

Newcastle are without a win in their last four meetings with Saturday’s opponents, with their last victory coming in 2017 when this was a Championship fixture. Brighton were 1-0 winners at St James’ Park last season thanks to Beram Kayal’s first half strike. A repeat scoreline is priced at 13/2 on SkyBet.

Neil Maupay has enjoyed a promising start to his Brighton career after signing from Brentford in the summer. The Frenchman has scored twice in five games, including in last weekends stalemate with Burnley. Maupay to score anytime is at a price of 9/5 on SkyBet.

Newcastle have struggled at home so far this season and are yet to win with their only home point coming in the 1-1 draw with Watford. Newcastle have also scored in every PL match they have played this season bar one, and I’m expecting them to find the back of the net this weekend. Newcastle to score 2+ goals is priced at 7/4 on SkyBet.

I am expecting a tight affair when these two meet on Saturday evening, but feel that Newcastle will edge it and claim their first home win this season. Despite losing 3-1, Newcastle can take a lot of positives from their performance against Liverpool, particularly in the first half an hour where they were threatening on the counter attack. It will be interesting to see whether Steve Bruce encourages his side to play with more attacking impetus, especially as they are at home.

The referee for this fixture is Martin Atkinson. The 48-year-old has appeared in all five PL matchdays so far and has accumulated a total of 19 yellow cards. With this considered, I would recommend a minimum of 30+ booking points for this fixture.

This match will be shown live on Sky Sports Premier League with kick off scheduled for 17:30 BST.