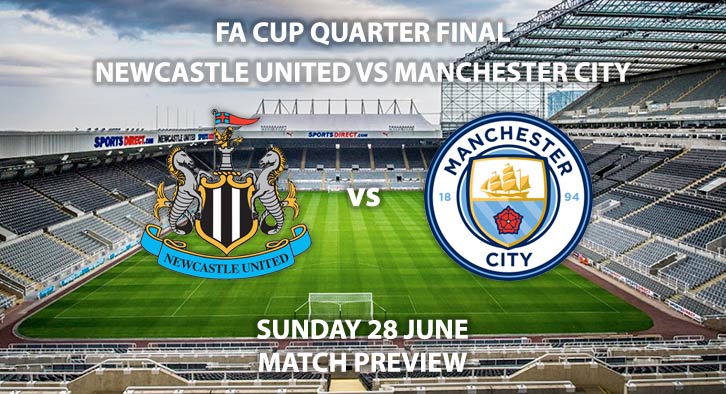 The Magpies overcame Championship high-flyers West Brom in an entertaining 3-2 victory away from home. Goals from Miguel Almiron and Valentino Lazaro sealed the victory. Meanwhile, City edged past second tier Sheffield Wednesday after a second half strike from Raheem Sterling.

Newcastle United are huge underdogs for this fixture and are priced at 12/1 by SkyBet to claim a shock victory to send them to the semi-finals. Steve Bruce’s side have been impressive since the season’s restart with a win and a draw so far. They have extended their unbeaten run to five matches in all competitions but face their toughest test in a while against a City side seeking revenge.

Going forward, Allan Saint-Maximin has been a breath of fresh air in the Newcastle attack and he is priced at 6/1 to score anytime.

Manchester City are expected to have an easy afternoon in the North East and are priced at 1/5 to win the match. Pep Guardiola’s side were beaten by Chelsea in midweek as Liverpool were crowned champions of the Premier League. City will now channel their focus into their remaining cup competitions, starting with this match. Whilst they did lose to Chelsea, they looked faster and fitter than before and will feel confident of advancing to the final four.

In attack, Kevin de Bruyne will hope to add to his season tally after a wonderful free-kick against Chelsea last time out. He is priced at 6/1 to open the scoring.

Last time these two met in the Premier League, City could only get a draw away at St James’ Park. Raheem Sterling gave City the lead which was cancelled out before half-time by Jetro Willems. However, Kevin de Bruyne’s late goal looked to have won it for Guardiola’s side but Jonjo Shelvey grabbed a late equaliser. 30 booking points were shown and SkyBet are offering 4/5 for 40+ booking points this time.

The match will be televised on BBC One HD and kicks off at 18:30.

– The visitors will have their eyes set on cup glory after their Premier League hopes were ended.