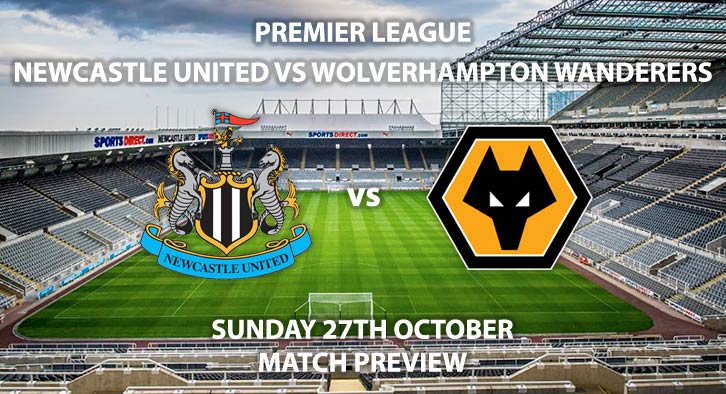 Newcastle United return to St James’ Park this weekend as they host Wolverhampton Wanderers in the Premier League on Sunday afternoon.

Steve Bruce’s side will be looking to conger a response following last weekend’s late defeat away to Chelsea, a match where the Magpies showed tremendous defensive resilience, until Marcos Alonso’s strike in the closing stages secured all three point for Frank Lampard’s side. Newcastle currently sit 18th in the Premier League and have won only one of their last seven matches.

Their opponents Wolves enjoyed a successful away trip to Slovan Bratislava on Thursday night, winning 2-1 thanks to goals from Romain Saiss and Raul Jimenez. Wolves are currently placed 13th in the league and secured a sensational 2-0 win away at last season’s Champions Manchester City prior to the International break. Nuno Espirito Santo’s side are unbeaten in their previous four PL fixtures, with their last defeat coming in the 5-2 home loss to Chelsea.

Both sides have endured slow starts to this seasons Premier League, and have won only twice each in nine matches. Both sides have only managed a combined total of six clean sheets so far this season, three a piece so BTTS – YES would be a market worth exploring for this Sundays encounter.

Wolves were victorious the last time these two sides met, albeit in the inaugural Premier League Asia trophy, a competition which takes place every pre-season. Wolves won 4-0 that day, thanks to goals from Morgan Gibbs-White, a Thomas David Allan OG, and a brace from Diogo Jota. Wolves are unbeaten in their last three against Newcastle, with the Magpies last win coming in February 2017, in what was then a Championship fixture. Matt Doherty scored the winner the last time these two met in the league, striking in the 95th minute which secured a 2-1 away win for Wolves, in a match basked in drama, with Newcastle boss at the time Rafa Benitez calling for VAR’s immediate application in the Premier League.

The referee for this weekends clash is Kevin Friend. The 48-year old has taken charge of five Premier League encounters so far this season, awarding twenty-four yellow cards and one red card in the process. This considered, I would recommend a minimum of 30+ booking points for this fixture. Friend is yet to officiate a match concerning Newcastle or Wolves so far this season.

This match will be shown live on Sky Sports Premier League, with kick of scheduled to take place at 14:00 BST.