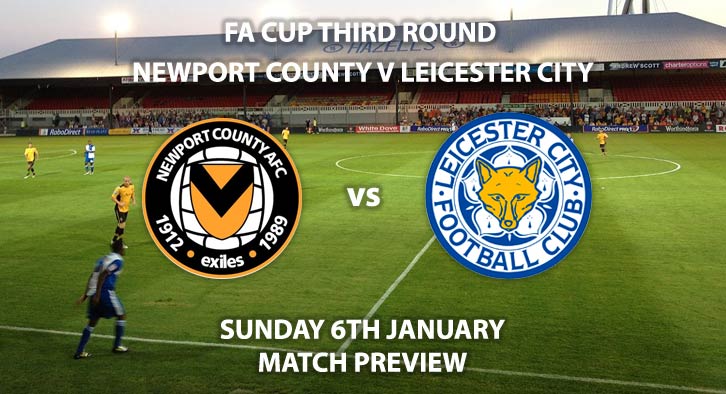 League Two side Newport County will entertain Leicester City in FA Cup action this Sunday evening. Newport enter this match in poor form with 3 losses and one draw in their last four matches in all appearances. Meanwhile Leicester have three wins from their last four matches and sit 7thin the Premier League table. Newport County are priced at 17/2 to win this match by SkyBet. The Welsh outfit are currently 12thin League Two going steady. In the first round of this competition they saw off Metropolitan Police 2-0. Then in the second round they faced Welsh rivals Wrexham where they needed a replay to beat them 4-0. Both Jamille Matt and Padraig Amond scored in the 4-0 drubbing of Wrexham and are the clubs two highest scorers this season in the league. They share odds of 11/4 to score anytime. Newport have not had a great season defensively. In the league they have conceded 42 goals in 25 games. They will face the hardest attack all season when they face the Foxes, so it looks unlikely they will keep a clean sheet. They are 18/1 to win and both teams to score. Leicester City are favourites and priced at 3/10 to win. The visitors are in good form ahead of this FA Cup tie with three wins in four matches. One of those wins coming against Manchester City. Their last outing saw them narrowly defeat Everton with Jamie Vardy scoring the only goal. However, he will likely be rested which could give the chance for Kelechi Iheanacho. The Nigerian has struggled to make an impact on the Leicester side however this match provides a great chance. He is 11/4 to score first. The Foxes have become a very solid defensive outfit and will hope to keep a clean sheet this Sunday. They are priced at 11/10 to win to nil. The match will be televised on BBC One and kicks off at 16:30. Prediction: Newport County 0 – 2 Leicester City – The Foxes will not start their strongest side but still shouldn’t have too many issues.

Odds and markets last updated on Sunday 6th January 2019 @13:28 GMT. Remember to keep visiting the tips and preview area for further updates and betting previews around tomorrow’s FA Cup Third Round Action and return of domestic action next week.