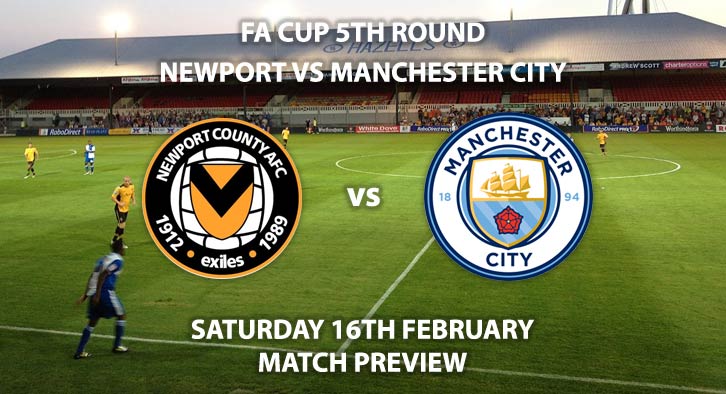 Newport vs Manchester City: The premier league champions take a trip to the fourth-tier of English football as they take on Newport County at Rodney Parade, fresh from beating Chelsea 6-0.

City regained their spot at the top of the Premier League with a thumping 6-0 win over Maurizio Sarri’s men at the weekend. Sergio Aguero claimed back-to-back hat-tricks, equalling Alan Shearer’s record in the process. Aguero now has the joint-highest trebles (11) in the Premier League history. Raheem Sterling also bagged a brace as he continues his push for the ‘PFA player of the year award’, whilst Ilkay Gundogan got the other strike. After netting 11 goals in a week, this will be a much different task for City.

One thing is for sure, Pep Guardiola will not allow his side to become complacent. In the previous rounds, City have spanked Rotherham and Burnley, by a combined 12-0 aggregate. Whilst Newport will have dreams of another dramatic upset, City know this is their tie to lose. With a maximum of two of the big six making the last eight, they have a great chance for the treble.

Newport come into this game off the back of two major cup shocks. Both of their wins have come at Rodney Parade. They beat Leicester 2-1 in the third round, and Middlesbrough 2-0 in a fourth-round replay. Since that win over Tony Pulis’ side, they have won one and lost one, both by a 1-0 scoreline. Michael Flynn’s side are marooned in mid-table in League Two. They sit 15th, 15 points above the bottom three and eight points off the play-offs. Padraig Amond is their top scorer this season with 17 goals and seven assists – He’s averaged a goal every 196 minutes this campaign.

Andre Marriner is the referee for this fixture. The Englishman has officiated 13 top-flight matches this season. In that time, he has accumulated an average booking points total of 32.3. Therefore, I would advise a maximum of 60+ total points for this fixture.

Manchester City have shown that they don’t tend to show mercy on lower-league opponents, having smashed Burton for nine and Rotherham for seven this season. With that in mind, it’s hard to see anything but an away win.

Newport County vs Manchester City will be televised live in the UK on BT Sport 2 with kick off at 17:30 GMT.

Remember to keep visiting the tips and preview area for further updates and betting previews around this weekends remainder FA Cup action.