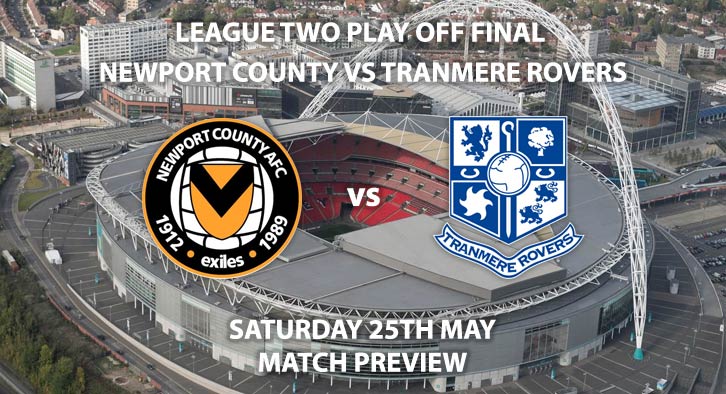 The two clubs finished 6thand 7thin the league standings, making them the two lowest ranked sides in the play-offs. The Welsh outfit overcame Mansfield 2-1 on aggregate whilst Tranmere won in similar fashion with the same win on aggregate. Either club is 90 minutes away from League One.

Newport County are slight underdogs for this math according to the bookmakers and are priced at 21/10 by SkyBet to win the match. Newport enter this match in very impressive form, unbeaten in 12 matches. In those 12 matches, they have not conceded more than one goal. With a tight defence, it seems likely Newport may win to nil and SkyBet are offering 7/2 for that to happen.

One player who has been instrumental to their successes is striker Jamille Matt. The Jamaican has 14 goals to his name this season and is a pest of a target man. He is priced at 11/5 to score anytime.

Tranmere Rovers, with the faithful support of referee Mike Dean, are priced at 6/4 to win inside 90 minutes by SkyBet. Tranmere are not in the desirable form of their opponents with just three wins from ten matches, but they have won when it matters. One player has stolen the headlines this season with a huge 29 goals to his name. James Norwood is the best goal scorer in the league and is priced at 6/4 to score anytime.

The referee for this match will be Ross Joyce. The official hasn’t taken charge of a League two match this season but has averaged 30 booking points per match when officiating in the UK this season.

Newport County vs Tranmere Rovers will be televised live in the UK on Sky Sports Football HD and kicks off at 15:00.

– This match is incredibly close therefore I am predicting it will make it to at least extra time.