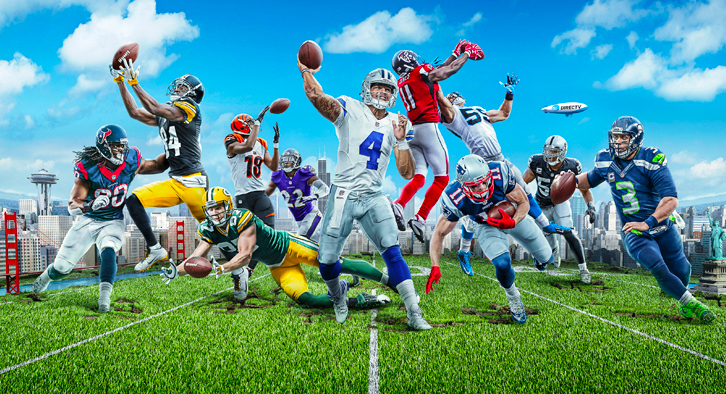 NFL – Gameweek 3 Preview – We preview and predict the games taking place over the weekend from the NFL. We came close with our 8 Fold Acca last week, missing by one in the last game as The Cowboys were beaten convincingly against Denver Bronco’s. We go again this weekend!

In London so no home crowd advantage for the Jags in this one, both teams have good defenses, but the Ravens have a few more weapons on offense that will give them the edge in a tight game.

Two of the worst teams in the league, both teams need a win. I’m going with the Browns in this one.

Until Further notice, the Giants have the worse offensive line in the league, and as a result their defense has to stay in the field much too long and they tire out. The Eagles have looked better at 1-1 while the Giants are 0-2.

Dolphins looked good in their opening game last week and while the Jets are competitive, the Dolphins will carry over their momentum.

The Broncos defense continues to impress, requiring the offense to do little. I believe that will continues here, due to the Bills not having enough weapons to wear down the Broncos.

The Steelers offense is rounding into form, against the struggling Bears, they will continue to develp the chemistry with all of their weapons.

The two best NFC teams go at it and this should give us fireworks. Both offenses have been very impressive, while both defenses have improved. This will be a shootout featuring two of the top 4 NFL offenses and QB’s this year.

Tampa looked impressive in their opener, while the Vikings with QB Sam Bradford healthy looked great week 1, him missing time in week 2  showed that their offense struggled mightily. For now he’s questionable to play, and while the Vikings defense is top 5 in the league, they will not be able to contain The Bucks all game.

The Texans defense will show up, however as they do historically their offense will not be able to matchup with the Pats, thus leaving the defense out too long to tire. It will be tight early, but in the 2nd half I see the Pats Pulling away.

The Seahawks offensive line has been terrible to start the year, and while the defense has played up to par, they are facing a Titans team that will be looking to establish the run, and therefore ball control for the game. This game will be a close one with both teams looking to get their offense on track, in the end I’m going with the Titans at home.

The Packers have 11 players on the injury report, however WR Jordy Nelson will play, and their offense line has a few key guys returning to action as well. The Bengals meanwhile haven’t scored a TD so far this season, and with the firing of their offensive coordinator they will be looking to get on the board. I have the game competitive early, with the Packers pulling away down the stretch.

Alex Smith and the Chiefs have been impressive to start the year, on both sides of the ball, while the Chargers lost each of their games due to missed FG’s in the last minutes of the game. This will be competitive, I think the Chiefs have a few more weapons, and will pull it out down the stretch.

Sunday night primetime game with a matchup we don’t often see. The Raiders are coming in looking impressive to start the year at 2-0, while the Redskins are 1-1and are looking to have the big offensive game from QB Kirk Cousins they expect. Both teams are struggling on defense, so for this game I’m expecting a shootout. The Raiders in the end will continue to impress.

Cooper and Crabtree, 1 TD each

Monday night prime time game, after the Cowboys struggled and their blowout loss to the Broncos, its hard to imagine that type of performance two weeks in a row. The Cardinals have struggled and with RB David Johnson on IR, their offense won’t be able to keep pace with the Cowboys, I also expect a better and more motivated performance from RB Ezekiel Elliott.