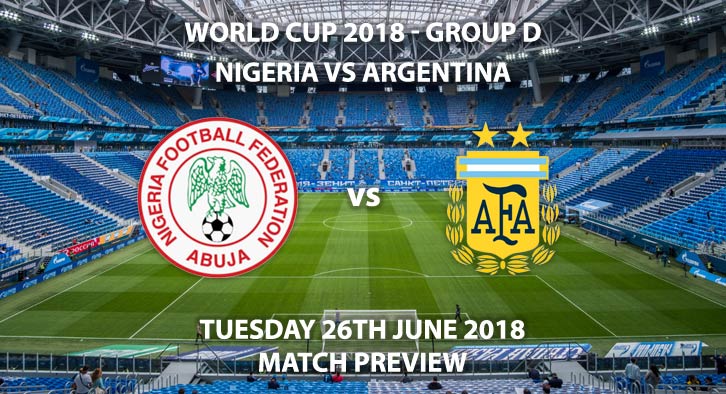 Nigeria vs Argentina – ‘The Super Eagles’ were on top form as they dispatched Iceland in a 2-0 victory and rode their luck with Gylfi Sigurdsson missing a penalty late on to scare the Nigerians. Ahmed Musa was a joy to watch, as he bagged a brace as the African’s rejoiced. Musa to score anytime is priced at 3/1; a good bet to back as he looked a huge threat with his pace.

Argentina have been a sorry sight thus far, with their tournament hanging in the balance. Defensively unorganised, slow to build attacks and far too reliant on Lionel Messi, the South American side were humiliated by Croatia as Luka Modric ran the show to confirm their place on the last 16.

The Nigerians are currently on three points, with a victory this Tuesday seeing them through to the knockout stages. They are priced at 11/2 to defeat the Argentinians. They struggled to show their vibrant brand of football in their first outing however in their win over Iceland they were much more fluid. John Obi Mikel played a deeper lying role which allowed Oghenekaro Etebo to flourish in the middle of the park. Arsenal’s Alex Iwobi was benched however could start their third match.

Argentina, priced at 8/15, are still yet to show their talents and illustrate their delightful attacking arsenal. Sergio Aguero has struggled for service whilst Lionel Messi and Angel Di Maria have been ineffective in their creative roles. Messi is priced at 4/6 to score anytime, an outcome that is likely as he understands this is his last chance to have a chance to lift the World Cup.

The match is likely to see one of them eliminated and the other go through, however the result of their groups other match will play a part. Croatia will play Iceland at the same time, with the Croatians already qualified.
The referee for this fixture is Turkish official Cuneyt Çakir. The Turk is a strict official who is no stranger to his pocket. Expect cards.

Tips updated at 17:40 GMT on 26th June 2018. Markets unlikely be updated again prior to the game kicking off.