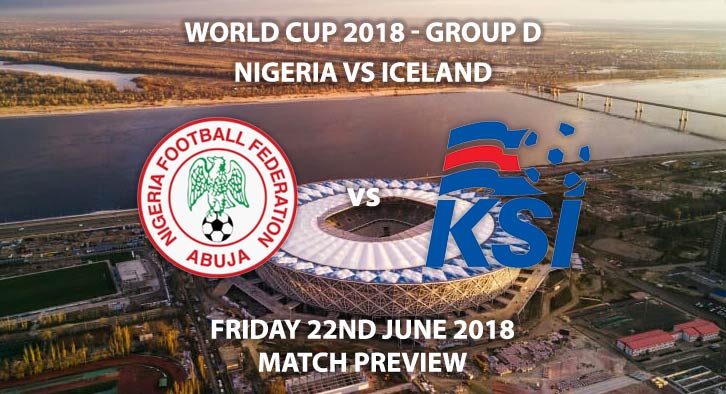 Nigeria vs Iceland. The Europeans, Iceland will be hoping to build on their draw with Argentina with victory against Nigeria, with both sides needing a win.

Iceland impressed in their opening Group D match, drawing 1-1 with Argentina despite going behind. They defended for their lives and held a very impressive defensive shape, limiting Lionel Messi and co to speculative efforts on goal. When they needed their ‘keeper Hannes Thor Halldorsson, a part-time movie director, he came to the rescue – denying Messi from the penalty spot. After that impressive draw, a win against Nigeria could put them in a great spot to qualify from Group D. Despite playing on the counter-attack against Argentina, they looked dangerous in attack. Glyfi Sigurdsson was at his creative best despite missing the last two months through injury – he could be crucial in their next two group games.

Nigeria were lacklustre in their opening match defeat against Croatia. They gave away two sloppy goals and failed to pose any threat in attack, despite registering seven shots on target. The reality is, they never looked like scoring and that has to change in this next game. Realistically this is now a must-win match for Nigeria. If they don’t win they will be without any hope of snatching second place in the group.

Whilst there’s very little chance of Nigeria playing as poorly as last time, I still think Iceland will win. They showed a lot of grit and determination against a superior side. Now it’ll be interesting to see if they can translate that level of performance against a weaker opponent.