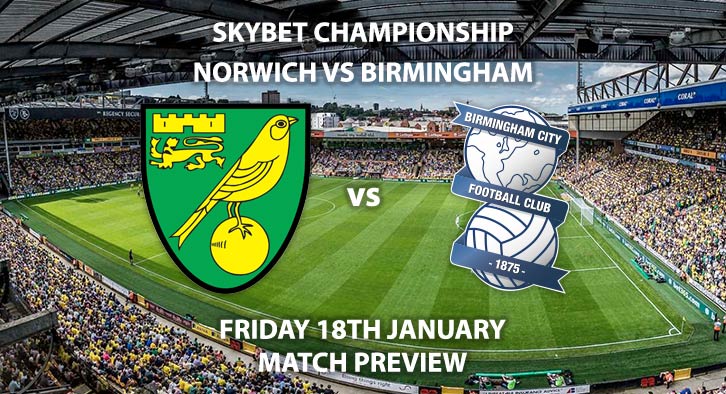 Norwich City vs Birmingham City:  The Canaries will be hoping to move back into the automatic promotion places when they take on play-off hopefuls Birmingham on Friday night at Carrow Road.

The Canaries are on their worst run of the campaign after just one win in six games. That run has seen them drop to third in the table, although they are level on points with second-placed Sheffield United. Daniel Farke’s side have exceeded expectations this season, but there are signs that they are beginning to run out of steam. Norwich’s habit of high-scoring games has begun to hurt them and they’re falling on the wrong side of some of those results. They did earn a positive draw at West Brom last time out, with Jordan Rhodes coming off the bench to snatch a point.

That was another game in which they left it late – Norwich have scored more goals after the 80th minute than any other team in England this season. The Canaries need to start keeping clean sheets if they’re to challenge for the top two. Their last came five games ago and they’ve conceded nine times since then. They have the firepower, they just need to tighten up at the back.

Birmingham have also surprised a few with their lofty position in the table. This time 12 months ago Birmingham were bottom – now they sit eight. That is a testament to the job Gary Monk has done at St Andrew’s. The Blues are only four points off the play-offs at present but need to address a four-game winless run in order to make ground on the top six. They lost to fellow promotion contenders Middlesbrough last time out, which was their first defeat at home in some time. On the road, they’ve only lost once in five games, which came in the FA Cup at West Ham. That shows they are a gritty side, which can dig in to get results.

Tim Robinson is the referee for this fixture. The Englishman has officiated 9 second-tier matches this season. In that time, he has accumulated an average booking points total of 52.8. Therefore, I would advise a maximum of 70+ total points for this fixture.

Norwich aren’t in the best of form, whilst Birmingham don’t often get beaten away from home. If the Canaries want the top two, this is the sort of tough game they have to win. Having said that, I think this will be a draw.

Norwich City vs Birmingham City will be televised on Sky Sports Football HD and kicks off at 19:45.