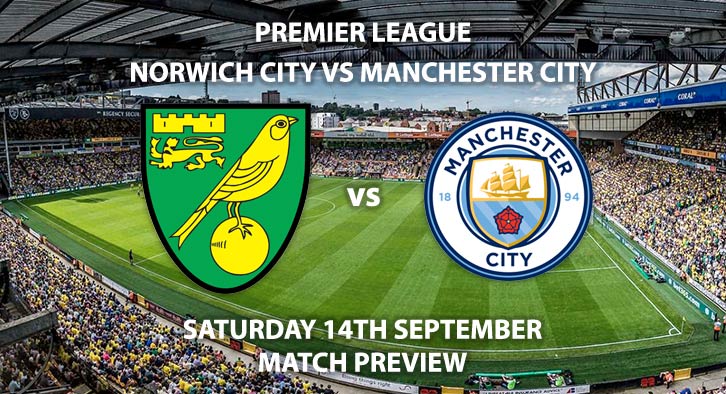 Manchester City will be looking to maintain their unbeaten start to the Premier League season with another three points against Norwich City at Carrow Road.

Pep Guardiola’s side trail Liverpool by two points in the race for the title. City’s 2-2 draw with Tottenham Hotspur is the difference between the two sides, with the champions taking maximum points in every other fixture. They’ll be without Aymeric Laporte for a few months with a knee injury which will call on Nicolas Otamendi and John Stones to step up to the plate. Fernandinho and Kyle Walker are City’s only other make-shift options at the heart of their defence.

Raheem Sterling has made a sensational start to the new season. The winger has seven goals in six appearances this season for club and country. Alongside Sergio Aguero and Bernardo Silva, they have the deadliest attack in the league with playmakers such as Kevin de Bruyne and David Silva feeding them at will. As a result, they should have some joy against a porous Norwich defence.

Norwich have one win and three points to their name after four league fixtures. That victory came against Newcastle United, another team in a relegation dog fight. Their form at Carrow Road will be vital and having run Chelsea close a few weeks ago, City will need to be wary of the threat they can pose teams.

The Canaries’ expansive style may leave them open at times, but it also makes them dangerous against every side. In their fixtures against Liverpool and Chelsea this season they’ve scored three goals, which shows they can hurt superior opposition. Of course, their main man is Teemu Pukki, who has scored all but one of their Premier League goals this season.

Kevin Friend is the referee for Saturday tea-time’s match. The Englishman racked up an average booking points total of 60, across 3 Premier League matches this season. With that in mind, I would recommend a maximum of 60+ booking points for this fixture.

City look imperious and with the way Norwich are conceding goals, I can only see one winner. As previous clashes against the top six have shown, I wouldn’t bet against the Canaries getting on the score sheet.

Norwich vs Manchester City will be televised live in the UK on Sky Sports Premier League with kick off at 17:30 GMT.