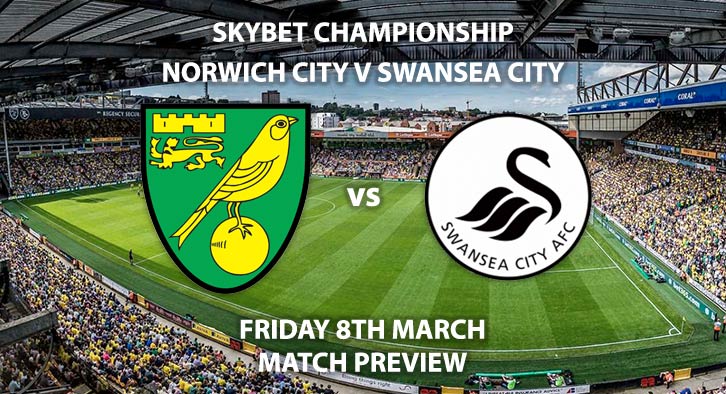 Norwich City vs Swansea City: League-leaders Norwich City host mid-table Swansea City as they look to extend their lead the top of the Championship table with three points.

The Canaries moved two points clear at the division’s summit last weekend with a 3-1 win away at Millwall. That win has given Daniel Farke’s side a four-point gap over third-placed Sheffield United in the bid for automatic promotion. 24-goal striker Teemu Pukki came up with their third to cap off a fine away win. Norwich have performed above expectations in the league this season, yet don’t look like falling away. Given the inexperience and youth within Farke’s side, achieving promotion would be a phenomenal achievement. Norwich’s main strength is that their goals are spread out across the side. Pukki is the leading marksman but with Onel Hernandez, Marco Steipermann, Jordan Rhodes and Mario Vrancic, they have other outlets too. At Carrow Road, Norwich are unbeaten in 2019, winning three of their last four games.

Swansea have endured a turbulent first season back in the Championship. Graham Potter’s side are the kings of inconsistency and sit marooned in mid-table. The Swans are 14th in the table, seven points off the top six. They’ve won five of their last ten games in all competitions, losing three and drawing two. It’s been a season of transition under Graham Potter, with the club selling a lot of their key assets. Their last league win on the road came on New Year’s day away at Reading, which is a run the club need to address. The off-the-field distraction haven’t helped matters at the Liberty Stadium either, with Hugh Jenkins stepping down as chairman after a number of years. In Oli McBurnie, however, they have a striker capable of winning them matches. The Scotsman has 18 goals this season, in his debut campaign as the club’s first-choice number nine.

Rob Jones is the referee for this fixture. The Englishman has officiated 35 second-tier matches this season. In that time, he has accumulated an average booking points total of 35.1. Therefore, I would advise a maximum of 50+ total points for this fixture.

Norwich will see this game as a real chance to further stretch their lead on their promotion rivals. Swansea’s poor form on the road could also prove a major issue for them. As a result, I’m siding with the hosts to get all the three points.

Norwich City vs Swansea City will be televised live in the UK on Sky Sport Football with Kick Off at 19:45 GMT.

Odds and markets last updated on Friday 8th March 2019 @18:25 GMT. Keep checking back to see if there’s any updates to markets – the time stamp in the previous sentence for when we update tips on this page will be updated.