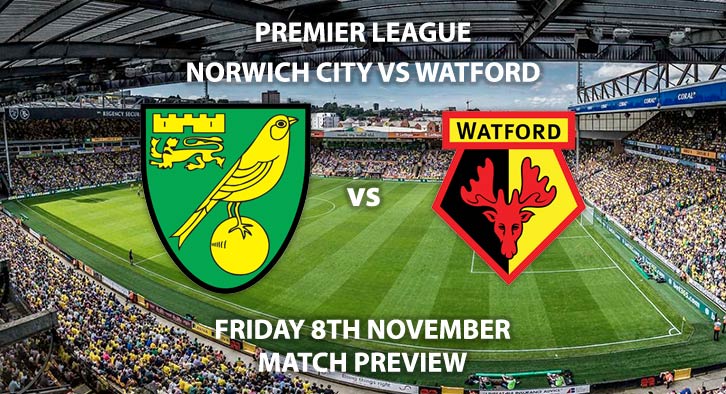 Norwich City host Watford at Carrow Road in the latest instalment of Friday night Football in the Premier League.

The Canaries are without a win in their last six, with their last victory coming in the second week in September over last season’s Champions Manchester City. Daniel Farke’s side are experiencing somewhat of a Premier League reality check following the high of promotion, after their relatively positive opening to the season.

Their opponents Watford, to put it bluntly, haven’t really started this season what so ever- and are the only team in the Premier League, and the Football League yet to register a win so far this season. There has already been a change in the dugout at Vicarage Road this season which came less than a month into the season. Javi Gracia was axed after three consecutive league defeats, only four months after their FA Cup final defeat to Manchester City; their first final since the 1983/84 season.

Both sides come into this clash occupying 19th and 20th position in the League. Watford are at the foot of the table, unsurprisingly after their dismal start. Meanwhile Norwich have picked up only one point out of a possible 15.

Both sides have proved they have been no strangers to shipping goals, with a combined 49 goals conceded in 22 matches so far this season. Between the two they have kept a combination of three clean sheets in the 22 matches combined. (Watford 2, Norwich 1). This considered, BTTS is certainly a market worth exploring for this fixture.

Friday nights encounter is the first between the two sine the 2015/16 Premier League season. The Canaries will be hoping for a repeat result, as they ran out 4-2 winners at Carrow Road. In fact, it’s Norwich who have the far superior recent record between the two, and have won four of the last five against Watford.

The referee for this fixture is Andre Marriner. The 48-year old has overseen seven matches in the league this season, awarding fourteen yellow cards, and one card in these fixtures. This considered, I would recommend a minimum of 20+ booking points for this clash. Marriner is yet to take charge of a match concerning Norwich, but was the man in the middle for Watford 0-0 draw with Sheffield United at Vicarage Road.

Norwich City vs Watford will be televised live in the UK on Sky Sports Football with kick off at 20:00 GMT.