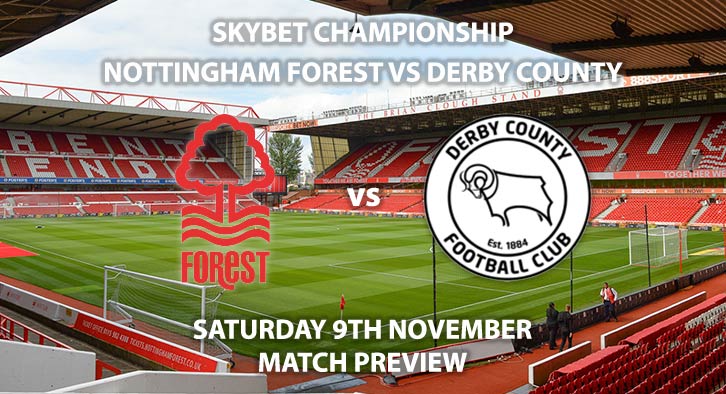 Nottingham Forest return to the City Ground this weekend as they host Derby County in the SkyBet Championship.

It’s the first East Midlands clash of the season in the Championship this season between the two, with so much more than just three points on the line.

Forest enter Saturday’s clash in a mixed run of form following their bright start to the season. Sabri Lamouchi’s side have lost twice in their last three, which has seen them vacate top spot and slide down to 5th place. Forest did last time round however, they defeated Luton 2-1 at Kenilworth Road, which was a welcomed three points following back to back defeats for the first time this season.

The visitors Derby have seemed to have weathered their early season storm, with off field antics threatening to spiral out of control and impact their season. Philip Cocu’s side won 2-0 at home to Middlesbrough last time round, thanks to a double from Tom Lawrence. If Cocu’s Derby County are to gain any success this season, then they need to work and work hard on fixing their away form. The Rams have won once away from Pride Park this season, and that victory came on the opening day in the 2-1 win at Huddersfield. Since then, Derby have picked up six out of a possible twenty-one points on the road- a statistic which makes grim viewing for any Derby fan.

The only saving grace so far this season for Derby has been their home form. The Rams are unbeaten in their last six at home, drawing two and winning their last four consecutive home outings.

Forest are currently 5th in the division, meanwhile Derby find themselves down in 15th. Despite ten places between the two Midland’s rivals, there is only four points separating the two, meaning that a win for Derby would likely propel them up the table, and only one point behind Forest. This season’s Championship has followed the mould of the majority which have come before, extremely tight and competitive for places; which is always the case.

If recent form between the two is a contributing factor heading into this clash, then it’s exciting reading for all Forest fans. Lamouchi’s side already have one over Derby this season, following their 3-0 League cup triumph earlier this season. Forest have won the last two meetings. For Derby, well they’re without a win in over two years against Forest in over two years and haven’t taken all three points from the City ground since 2012.

The referee for this weekend’s clash is Darren England. England has taken charge of seven championship matches so far this season, accumulating a total of twenty-three yellow cards. This considered, as well as the fierce rivalry between the two, I would recommend a minimum of 30+ booking points. England took charge of Forest’s opening day defeat to West Brom where he awarded one yellow card and oversaw Derby’s 1-1 home draw with Cardiff where he gave out four yellows.

Nottingham Forest vs Derby County will be shown live on Sky Sports Football, with kick off scheduled to take place at 12:30 GMT Saturday lunchtime.