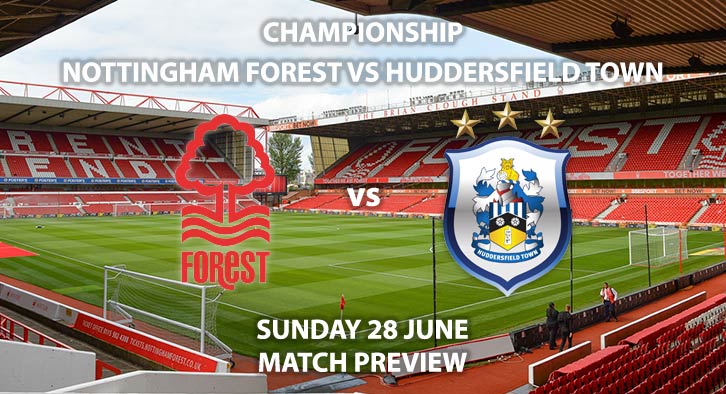 Nottingham Forest return to the City Ground this weekend when they take on Huddersfield Town in the SkyBet Championship.

Both sides are battling at both ends of the table and will be hoping they can take all three points this weekend to edge themselves that bit closer to their differing targets. Forest are hoping to secure a place in the play-offs and are 5th, 4 points clear of Preston who occupy the fourth and final spot. Huddersfield on the other hand are one point and two placed above the Championship relegation zone and have plenty of work to do to avoid the drop.

Both sides will be hoping to return to winning ways after failing to do so in their first matches since the Championships return. Forest’s draw with Sheffield Wednesday extended their winless run to 3 matches meanwhile Huddersfield lost 2-0 to Wigan which saw them slip further down the table, closer to the drop zone.

Huddersfield were 2-1 winners in the reverse fixture back in December. The Terriers have a tremendous record against Forest and have won 5 of the last seven in this fixture. SkyBet are offering odds of 12/5 for an away win on Sunday.

Sabri Lamouchi’s Forest side will be hoping to improve their home form as the businesses end of the season approaches. Forest have won only one of their last five matches at the City ground. This weekend would be the perfect time to return to winning ways.

The man in charge of this one is David Webb. Webb has taken charge of 21 Championship matches this season, accumulating a total of 55 yellow cards and no red cards. Decembers meeting between these two produced six yellow cards. This considered, I would recommend a minimum of 30+ booking points for this one.

This match will be televised on Sky Sports Main Event/Football with kick-off scheduled to take place at 14:15 on Sunday.