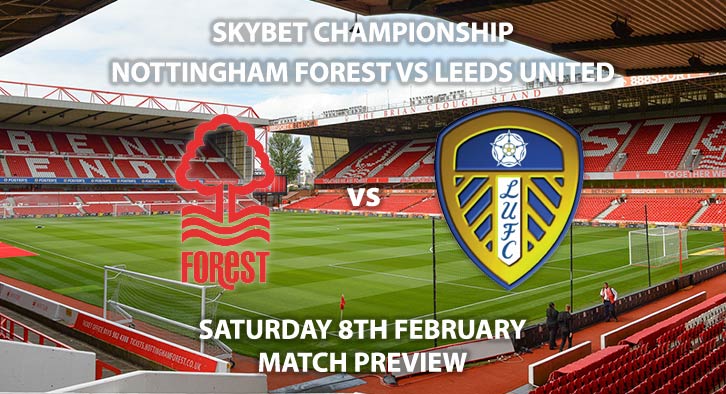 Both sides will be keen to return to the field and put things right, following disappointing defeats in their most recent Championship encounters. Forest were defeated 2-1 away to Birmingham City, meanwhile Leeds suffered a surprise defeat at the hands of Wigan Athletic; a result which could heap pressure on their bid to return to the Premier League.

Leeds United are threatening to follow a similar pattern in the seasons previous where they have looked odds on for promotion, by dropping silly points and losing games in quick succession, which has ultimately cost them promotion to the top-flight. Marcelo Bielsa’s side have lost three of their last four league outings, which has seen West Brom leapfrog them and take top spot. United are 2nd, one point behind the Baggies.

Nottingham Forest themselves have promotion aspirations of their own, and currently sit 4th in the league. Boss Sabri Lamouchi picked up the manager of the month award for January, but that achievement won’t compare to a return to the Premier League in his first season at Forest. Focus is firmly on firstly securing their play-off status, but a run of wins could easily see them return to the automatic promotion places, where they featured in at the beginning of the season. Forest’s defeat to Birmingham was their first of 2020, and before that they has strung together a seven-match unbeaten run, which propelled them into the thick of the play-off places. A win on Saturday evening would be the perfect response.

Joe Lolley has scored three goals in his last four matches for Forest, and SkyBet are offering odds of 7/2 for the forward to score anytime on Saturday.

Both sides played out a 1-1 draw in their meeting in August, but it’s Leeds who possess the better recent record in this fixture. United have lost of the last six meetings between the two, winning two and drawing three.

The referee for this encounter is Oliver Langford. The Englishman has been one of the more lenient referees this season, and has averaged under four yellow cards per match. Considering what’s at stake in the race for promotion to the Premier League, I would recommend a minimum of 40+ booking points for this fixture.

Nottingham Forest vs Leeds United will be televised live in the UK on Sky Sports Football with kick-off at 17:30 GMT.