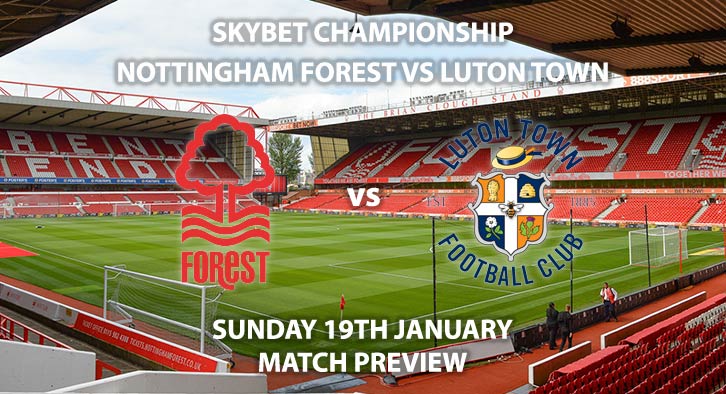 Forest are enjoying a strong season near the top end of the championship standings. They are currently fifth in the league and are unbeaten in their last four matches. Meanwhile, Luton Town are enduring a torrid time at the foot of the table with six losses from their last seven league outings.

Nottingham Forest are priced at 8/13 to win the match by SkyBet and continue their bid for a play-off place at the end of the season. Sabri Lamouchi has got Forest playing some very attractive football which has seen them enjoy the new year period to date. They won their last two home matches against Blackburn and Wigan and have a relatively good record against teams battling relegation.

Going forward, Lewis Grabban has been their standout performer with 14 goals so far this term. He is priced at 13/5 to open to scoring at City Ground this Sunday.

Luton Town are priced at a huge 17/4 to pull off a shock victory and potentially lift them off the bottom of the table. Luton are in desperate need of a win no matter how they achieve it. Despite scoring goals not being the hardest thing for them to do this season, their defence has been atrocious. They have conceded 36 goals from 14 away matches and lost twelve of those matches.

Striker James Collins is their biggest hope of survival this season and he has nine goals so far. He is priced at 5/2 to score anytime.

The referee for this match will be Tony Harrington. The official has not been too rash when brandishing his cards this season and has an average of 31.6 booking points from his 16 second division matches in the middle.

– The hosts are in much better form and shouldn’t have too many problems beating their subpar opponents.