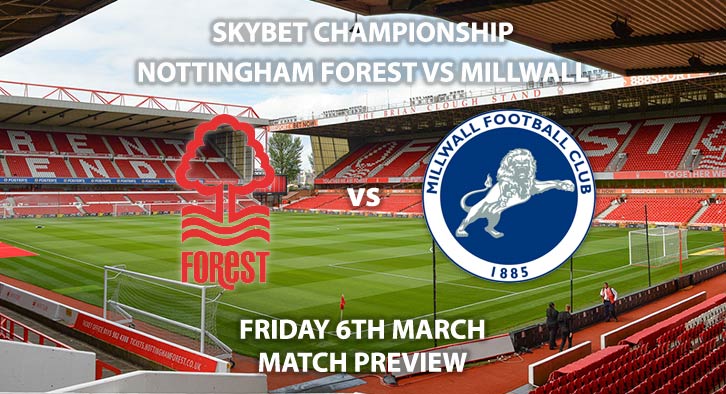 The hosts are on a four-game unbeaten run and are aiming to cement their place in the top six places for the play-offs. Automatic promotion seems highly unlikely. Meanwhile, Millwall still find themselves in the mad hunt for a play-off place but it is likely they will just fall short and are not in the best form.

Nottingham Forest are priced at 13/10 by SkyBet to win the match and continue their impressive unbeaten run in the league. Sabri Lamouchi’s side are kicking into gear at the right time of the season. They are a rather industrious side, with moments of flair in attack but they base themselves off being hard to defeat. They have kept two clean sheets in their last three home matches.

In attack, striker Lewis Grabban got back to scoring ways with a crucial goal in their 2-2 draw with Middlesbrough. He has 17 goals this season and is priced at 8/5 to score anytime.

Millwall are priced at 9/4 to claim a shock victory away at home and their first three points in four matches. The Lions are definitely still in their den as we enter the crucial end of the season. The London-based club have not impressed in recent weeks and are struggling to create in front of goal.

Attacker Jed Wallace has been Millwall’s main goal threat with 10 goals and 9 assists this term. He is priced at 5/2 to score anytime.

The referee for this match will be Geoff Eltringham. The official has been no-nonsense this season with an average of 40.6 booking points from his 18 Championship matches in charge.

Nottingham Forest vs Millwall will be televised on Sky Sports Football HD and kicks off at 19:45.

– The hosts are in good form and are trying to cement a top six finish. Their quality should be too much.