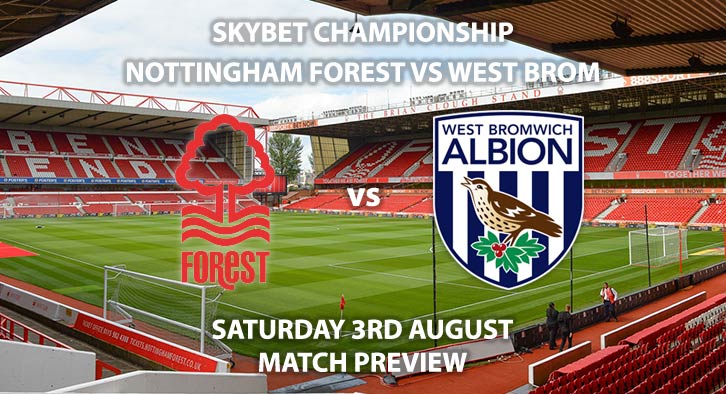 Both sides head into Saturday’s fixture under leadership, and with genuine hopes of success for the forthcoming campaign. Frenchman Sabri Lamouchi took the reigns as Forest manager following the departure of Martin O’Neill last month, for what is to be his first taste of management in English football. The Baggies on the other hand boast an ex-Premier League manager at the helm, in former West Ham boss Slaven Bilic.

Forest head into the fixture as slight favourites, with a price of 7/5 on SkyBet. Kickstarting the season with a win will be the objective for both sides, but with Forest on home soil there will be an expectance of Lamouchi to deliver the three points come Saturday evening. Forest ended the 2018/19 campaign finishing 9th in what was a satisfactory yet bizarre season which saw management change hands twice. If Forest are to enjoy a successful campaign this year-round, frontman Lewis Grabban will be expected to build on his 17 goals from last season, with SkyBet offering odds of 5/1 for him to score first.

Baggies fans will be expecting their side can go one step further than last season which saw them dumped out of the Play-offs by Dean Smith’s Aston Villa, who went on to clinch promotion to the Premier League with a 2-1 victory over Derby County at Wembley. The visitors head into this fixture priced at just below evens at 19/10 on SkyBet. The Visitors have spent just shy of £15 million in this summers transfer window, with £8 million on the acquisition of Kenneth Zohore from Cardiff City. The Ivorian is priced at 11/1 to score a header.

The referee for Saturday evening’s clash is Darren England who issued 200 yellow cards in 51 Championship appearances last season, as well as awarding 12 penalties. SkyBet are offering odds of 9/4 for a penalty to be awarded.

The last meeting between the two sides was in February, and ended in a 2-2 draw at the Hawthorns. This match will be broadcast Live on Sky Sports Football and kicks off at 17:30.