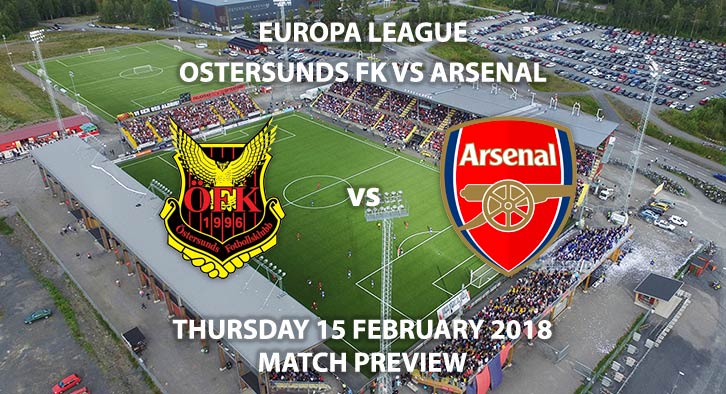 Ostersunds vs Arsenal – Arsenal seek Europa League glory to salvage their season and a trip to Sweden against Ostersunds in the Last-32 is the first obstacle in doing so.

After a crushing defeat to bitter rivals Tottenham Hotspur in the North-London derby, Arsenal’s top-four hopes hang in the balance. Wenger’s side are in 6th place, now seven points away from Spurs and eight adrift of Chelsea in the Champions League places.

Winning the Europa League remains the most realistic chance of qualifying for Europe’s elite competition next season, and after defeat to Nottingham Forest in the FA Cup it is expected Wenger will play a full-strength side to do so.

Ostersunds are currently enjoying the best period of their existence. Established in 1996, Englishman Graham Potter has led the Swedish outfit from the fourth tier in 2011 (averaging attendances of 783) to the top division in just half a decade.

A fantastic victory in the Svenska Cupen (Sweden’s primary cup competition) signified the magnificent rise of the club, but perhaps even more excitingly has taken them on a European adventure for the first time in their history.

Finishing 2nd in a group that also contained Athletic Bilbao, Hertha BSC and Zorya Luhansk continues the fairy-tale and has rewarded the club with their greatest-ever fixture – a clash with English giants Arsenal.

When looking for clean sheets the blatant choice here would be to go for Arsenal, they have kept nine this season – only the top five and Burnley have more. The fact they are overwhelming favourites is another matter. Being prone to a defensive mishap it wouldn’t be too far-fetched to see Ostersunds on the scoresheet, however. It would probably take a miracle for Potter’s side to deny Arsenal the away goal for 90 minutes though.

David Fernandez Borbalan has been named in charge of this one, the Spaniard has been very active in La Liga this term – giving out 62 yellow cards in his 12 matches. This places him 7th from 20 in Spain’s top tier for average cards per match at a rate of 5.64. Arsenal are yet to receive a red card in the Premier League this year and have picked up a middling 42 yellows, so shouldn’t offer too much in terms of headaches for the referee.

With the Swedish league not starting until April, Ostersunds may not be up to speed in dealing with an Arsenal side deep in the midst of a multi-faceted season.

But, maybe that means the underdogs have had longer to prepare and focus their energy on what would be the most remarkable of giant-killings. There’s only one way to find out.

Realistically, Arsenal should be far too strong for the Swedish counterparts and easily push them aside.

Ostersunds vs Arsenal will be televised live in the UK on BT Sport from 6PM GMT.