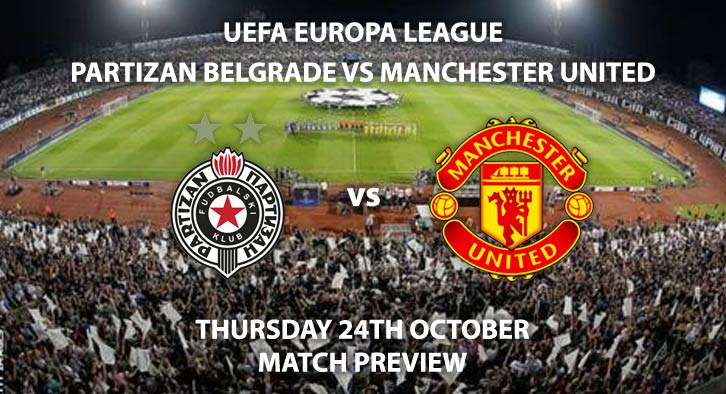 Ole Gunnar Solskjaer’s Manchester United travel to Serbia in the next chapter of their UEFA Europa League journey. Their opponents are Partizan Belgrade.

The hosts are top of Group L, with a better goal difference than their opponents. They have four points after a draw with AZ Alkmaar and a win over FC Astana.

Manchester United are all over the headlines for their poor start to the season. They are second in Group L and a win would take the pressure off the squad.

Partizan Belgrade are priced at 21/10 in by SkyBet. The Serbian’s are struggling for consistency domestically and are fifth in the league. However, they will feel they can hurt this Manchester United side who are also very inconsistent. The player who could hurt the visitors defence is attacker Umar Sadiq. He has 5 goals from nine appearances in the Serbian SuperLiga and is 14/5 to score anytime.

They have conceded in both their European matches so far. SkyBet are offering 5/6 for both teams to score.

Manchester United are 13/10 to win on the road. In their previous outing against Liverpool, they wronged some rights in an impressive performance and 1-1 draw. However, they are still a team with plenty of weakness. Going forward, Marcus Rashford and Dan James both improved on the weekend. They are 10/1 to both score on tonight although are not due to start.

Another player who may get some minutes is the young Mason Greenwood. SkyBet are price boosted the odds to 4/1 for him to score and Manchester United to win.

The referee for this match will be Spaniard Xavier Estrada Fernandez. Both of the club’s previous matches in this competition didn’t see many booking points but with a place on top of Group L at stake, it could get interesting for Fernandez. SkyBet are offering 1/1 for 50+ booking points.

The match will be televised on BT Sport 2 HD and kicks off at the early time of 17:55.

– The visitors should build on the positive signs from their Super Sunday draw with Premier League leaders Liverpool.