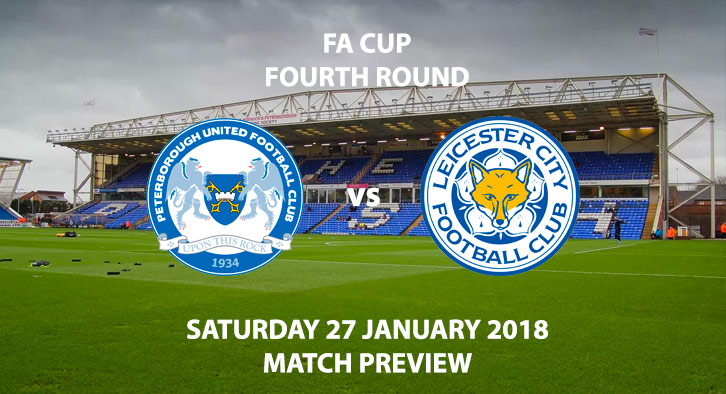 The morning televised game on Saturday 27th January 2018 will be live on BBC1 featuring Peterborough vs Leicester City.

After knocking out Aston Villa in the last round, Peterborough will be hoping for another cup upset as they look to head into the fifth round. This time on their own turf, the Posh will be looking for another famous scalp as they welcome Claude Puel’s men. If Grant McCann’s side are to upset the apple cart, they’ll be reliant on key players to have good games.

Jack Marriot and Marcus Maddison have already attracted interest from a number of Championship clubs and another good performance raise the duo’s stock even further. Maddison, in particular, has been one of League One’s best performers for some time and could join a long line of Peterborough prodigies to move on to bigger and better things.

Peterborough will be hoping to make the play-offs this year after falling short for the last couple of years. Sat in eighth, Posh sit three points behind sixth-placed Charlton ahead of this game. They ended their run of three league games without a win at the weekend with a thumping victory over Oldham. They have lost just one of their last ten games in all competitions and will fancy their chances against the former Premier League champions.

Leicester took two attempts to make it into the fourth round as they needed a replay to beat Fleetwood Town. Against fellow League One opposition the Foxes will need to put in a much better display if they’re to avoid a cup exit. In the league, Leicester have been good of late, having won two of their last three games, including an impressive 0-0 draw against Chelsea.

Claude Puel has definitely improved this side since taking over October and with a few reinforcements in the summer, I don’t see why they couldn’t challenge for a Europa League spot next campaign. Holding onto Riyad Mahrez will be key with the Algerian in scintillating form of late. With a host of big clubs circling the winger, Leicester may find themselves searching for a replacement in the not too distant future.

Peterborough have lost just one of the two clubs last four meetings, with the last fixture back in 2013. Michael Oliver is in charge of this game, with the Premier League referee averaging the third highest average booking points in the league. Oliver has also brandished 70 yellow cards this season, the most of any official in the top flight.

Looking at this weekend’s fixtures, you know there will be one or two shocks. I definitely think this has the potential for an upset. Peterborough have already proven that by beating Villa last time, whilst Leicester fielded a much-changed side against Fleetwood in both games. As is usually the case when Posh play, there should be goals, with BTTS a good bet.

More Weekend FA Cup previews from this weekend are available in our tips and previews section.