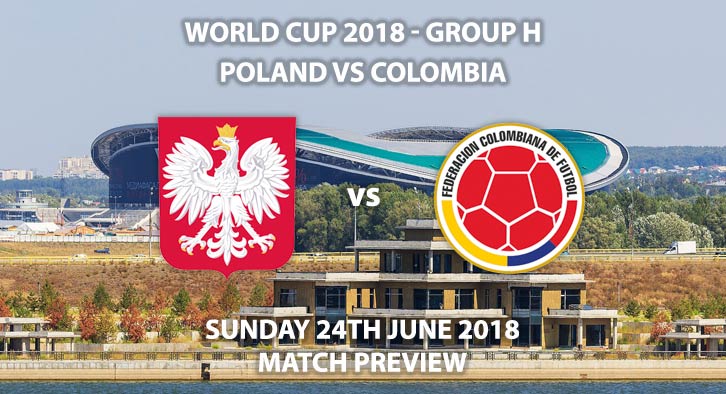 Poland vs Colombia –  both sides are in need of a result after opening-day defeats.

Poland were upset by Senegal as they opened their World Cup campaign. It was a deserved 2-1 win for Africa’s finest, who showcased their credentials on the biggest stage. Poland contributed to their own downfall, conceded an own goal before gifting Mbaye Naing the second. They struggled to get their talisman Robert Lewandowski in the game. The Bayern Munich striker was given little service despite the talent behind him in midfield. In truth, they looked most dangerous from set pieces, which brought them their goal. Overall, though, they will have to put in a much better display or risk facing an early exit.

Colombia will be without Carlos Sanchez for this match after the midfielder picked up the second quickest red card in World Cup history. The former Aston Villa man handled Shinji Kagawa’s goal-bound shot and was sent off after just two minutes and 56 seconds. With just ten men Colombia battled hard but found themselves on the wrong end of a 2-1 scoreline. Cult hero James Rodriguez was only fit enough to come off the bench and played just over half an hour; it’s crucial Colombia get their main man fit for this match. With 11 men, I think Colombia can definitely cause Poland problems, especially if James is in the side. They scored 20 goals in qualifying and proved, even with ten men, they’re a dangerous side.

Cesar Arturo Ramos is the referee for this  game. In 30 international matches he has averaged 2.75 yellow cards and 0.1 reds, awarding 0.13 penalties per game along the way. Therefore, I would recommend a maximum of 30+ booking points for any bets.

This is almost a must-win game for both sides. A point does neither side any favours, with both Japan and Senegal on three points. Having watched both sides, I was more impressed with Colombia and providing Rodriguez is fit, they could snatch a crucial win in this game. There’s no doubt it will be tight, though, and could easily end in a draw.