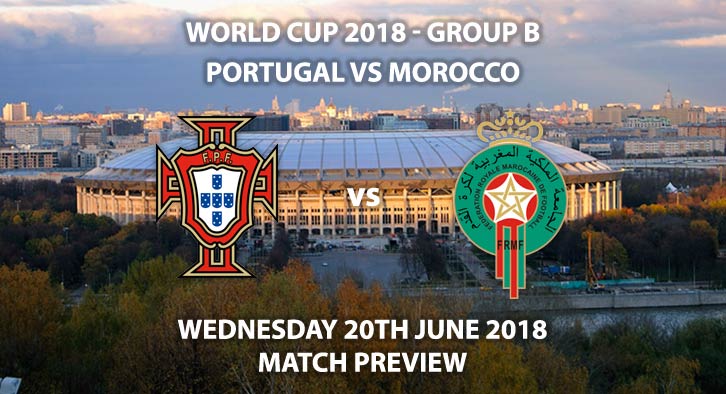 Portugal vs Morocco – Portugal are hoping to maintain their momentum by beating Morocco and get within touching distance of the last 16.

Cristiano Ronaldo is the name, once again, on everyone’s lips. The world stood up and took notice as the legendary forward scored a hat-trick against 2010 World Cup victors Spain in the previous match. This included a simply magnificent 88th minute free-kick to salvage a point for the current European Chapmions. The all-time record Portugal goalscorer to net from outside the box again is 15/2 with SkyBet.

The game against Spain finished 3-3 and was unquestionably the best match of the finals to date. It had everything. Fantastic football, drama, intrigue, and quality in abundance. Many labelled their 2016 European Championships win as a fluke but Portugal proved they mean business. Any team the Selecao’s (11 clean sheets in the last 17) and Ronaldo up front will do.

Beating Morocco would put Fernando Santos’ team in a wonderful position going into the last group game against Iran. Iran won their first World Cup match for 20 years with the game’s only goal in injury-time against the former. The Iran fans were sent into raptures. Their defensive resilience, and the performance of goalkeeper Alizera Beiranvand deserved it.

Rene Havard’s Morocco face the most challenging task possible to quality now. With Portugal and Spain left to play two victories are realistically needed, which is obviously no mean feat. A lack of fluidity in passing and chance creation was prevalent last time out.

The Atlas Lions have the quality in the squad though. Names such as Hakim Ziyech and Younes Belhanda, alongside captain Medhi Benatia of Juventus are top players that can challenge.

There is no sugar-coating it, however, Portugal are massive favourites. With an on-fire Ronaldo and the creative spark of Goncalo Guedes and Bernardo Silva behind him it will be tough. The Manchester City playmaker to score first and Portugal to win 3-1 is a massive 100/1 with SkyBet.

Morocco didn’t concede a single goal in qualifying, and only conceded from a freak lapse of concentration against Iran. So, there are no slouches at the back. Portugal will surely have too much to handle though, especially with a certain Real Madrid man as hungry as ever.

Portugal vs Morocco will be televised live in the UK on BBC 1 with kick off at 13:00 GMT.