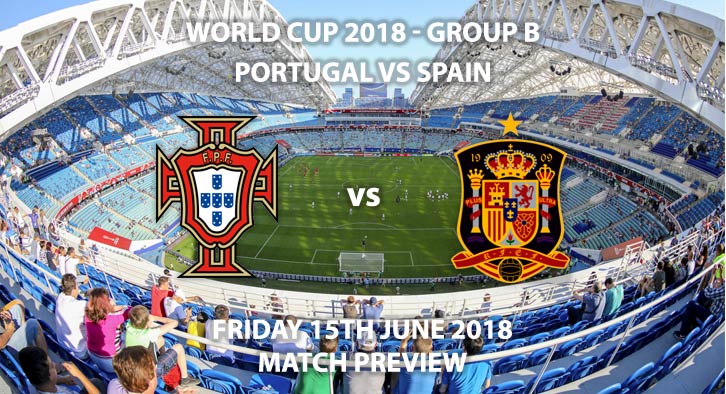 Portugal vs Spain – Portugal and Spain face off in a crunch battle in Group C, with both sides looking to put down an early marker in the World Cup.

With both these two sides expected to make it through to the knockout stages, this game could be crucial in deciding who tops the group. Spain have been revitalised since Julen Lopetegui took over two years ago and look ready to launch another World Cup push. Lopetegui has impressed so much that he has been appointed as Zinedine Zidane’s successor and will join Real Madrid after the tournament. With that in mind, what better way to sign off than to win a second World Cup title in eight years.

Spain have some fantastic talent, having rebuilt following their disappointing display in Brazil. David Silva, Isco and Sergio Busquets have all had fantastic seasons at their respective clubs, whilst Atletico Madrid representatives Koke, Saul and Diego Costa should all play crucial roles. They have the best ‘keeper in the world, in the shape of David De Gea, whilst Gerrard Pique, Jordi Alba and Sergio Ramos have won almost every honour possible between them.

Portugal will hope they can provide another shock after winning the European Championships two years ago. Lead by Ballon d’Or holder Cristiano Ronaldo, who will be crucial to their hopes in the competition, they will hope to go unnoticed once again. Manchester City winger Bernardo Silva will be hoping to build on his impressive debut campaign at the Etihad, whilst PSG loanee Goncalo Guedes has impressed at Valencia. Portugal may have some young blood in attack, but their defence is coming to the end of its cycle. Defenders Pepe, Jose Fonte and Bruno Alves are all starting what is likely to be their last World Cup. They’ll be hoping to sign off their international careers in style.

Gianluca Rocchi is the referee for Friday’s clash. The Italian plies his trade in Serie A, where he has averaged 5.25 card per match this season. That is the second highest in the division, with Rocchi showing 76 yellow cards and four reds across 16 league games.

This game will likely dictate the winner of Group B, although I wouldn’t discount Morocco contesting for second place. Despite Portugal being the European Champions, I expect Spain to get off to the perfect start on Friday.