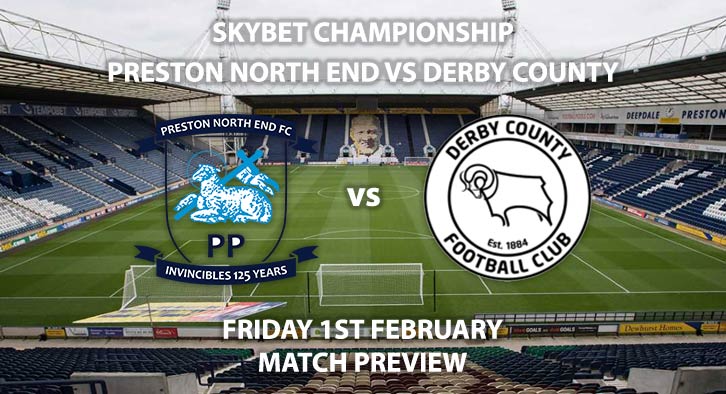 Preston North End vs Derby County: The Rams will be looking to bolster their bid for the top six with three points at Deepdale against Preston on Friday night.

Derby continued their cup exploits at the weekend with a 1-0 win over Accrington Stanley in the fourth round of the FA Cup. Martyn Waghorn’s 70th-minute strike was the difference between the side, although Jaden Bogle was sent off for the Rams on a sour note. That result has set them up with a trip to West Brom or Brighton in the last 16. In the league, Derby occupy the final play-off spot in sixth place. They sit two points ahead of seventh-placed Bristol City and one point above Middlesbrough in fifth. Securing a play-off spot is the Rams’ main aim for the rest of the campaign, alongside their FA Cup run. In the league, Derby have won two, drawn one and lost two in their five games, but have only lost one of their last five away matches.

Preston have proven to be one of the most inconsistent sides in the league. The Lilywhites have taken an upwards turn in recent weeks, with impressive results at QPR and Stoke City. Their 2-0 win over the Potters at the weekend has left them in 16thplace, but 12 points clear of the relegation zone. After finishing seventh last season, many expected Alex Neil’s sie to feature higher up the table, however a slow start to the season and lots of injuries have hampered their season. In January, Preston have signed two young players from the lower leagues, Brad Potts and Jayden Stockley. Both were on target in their debut win over QPR, whilst Potts was also on the scoresheet against Stoke.

Darren England is the referee for this fixture. The Englishman has officiated 14 second-tier matches this season. In that time, he has accumulated an average booking points total of 41.4. Therefore, I would advise a maximum of 60+ total points for this fixture.

Preston haven’t won at home in their last four outings, but have picked up two fantastic results in the last couple of weeks. Derby have dropped a few points lately and will want to put that run to an end. I’m going to plump for a drawn in this one, as Preston seem to have turned a corner.

Preston North End vs Derby County will be televised live on Sky Sports Football in the UK with kick off at 19:45 GMT.