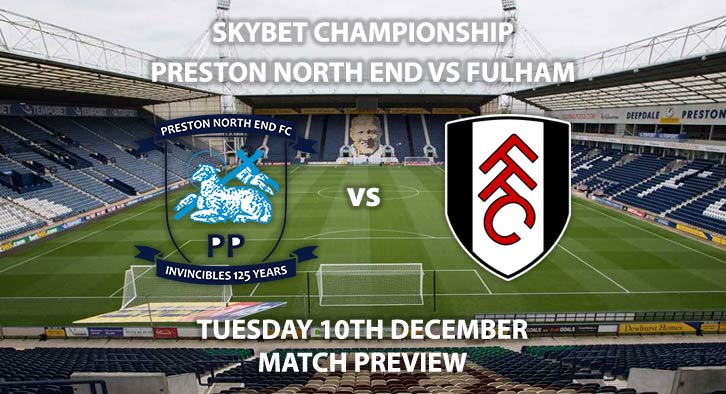 Preston North End look to return to winning ways in the Championship as they welcome the arrival of Fulham on Tuesday night.

The Lilywhites will be desperate to rediscover some of their early season promise, which saw them competing at the top of the division. Alex Neil’s side have lost their last four consecutive matches, a run which has seen them slip as low as 7th in the Championship. Their last Championship win came on November 9th.

Their opponents Fulham will themselves be hoping to bounce back from defeat, following their 2-1 home defeat to Bristol City on Saturday. Saturday’s loss was the first time Scott Parker’s side had been beaten since early November, when they lost 3-0 at home to Hull. Before defeat, Fulham had won four consecutive matches in the Championship, which had seen them rise to 3rd.

Fulham’s Aleksandar Mitrovic has scored four goals in his last five matches, which has taken his season tally to fifteen, the Championships top scorer. SkyBet are offering odds of 11/8 for the Serbian to add to his tally in 90 mins.

Tuesday nights encounter will be the first time these sides have met since March 2018, where Fulham were 2-1 winners at Deepdale. In fact, Scott Parkers side are unbeaten in this fixture since October 2000, a run which has seen five Fulham wins, and two draws.

The referee for this fixture is Keith Stroud. The 50-year old has overseen eleven Championship matches this season, accumulating a total of thirty-four yellow cards. This considered, I would recommend a minimum of 30+ booking points for this fixture. Stroud is yet to take charge of a match involving Preston this season but was the man in the middle for Fulham’s 2-0 win over Blackburn in August, where he awarded two yellow cards.

This match will be shown live on Sky Sports Football, with kick-off scheduled to take place at 19:45 GMT.