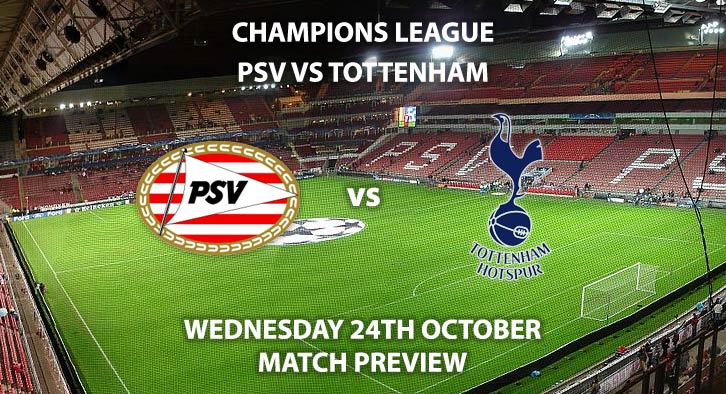 PSV vs Tottenham Hotspur – the visitors are scrambling for Champions League survival in a crunch match at PSV.

After an underwhelming start to the season, Mauricio Pochettino’s side have bounced back to win four consecutive Premier League games. Spurs are now only out of the top four on goal difference, in fifth behind North-London rivals Arsenal after Monday’s convincing 3-1 victory against Leicester.

With so much power in the league, namely Manchester City and Liverpool consolidation of a top four place is surely the goal once again for Spurs. The goals of Harry Kane will be vitally important in achieving that goal. The England captain and World Cup Golden Boot winner has six in all competitions so far, chasing more personal accolades.

It is a collective title that he, and Spurs yearn for, however. It is well documented that ‘Poch’ is yet to win a trophy at White Hart Lane (or Wembley) and whilst keeping such a talented squad each passing year is a missed opportunity. Whilst not amongst the favourites, Spurs have all the required tools to seriously contest in any competition, including the Champions League.

In Group B, Spurs have it all to do though. A late collapse at the San Siro brought heartbreak in a 2-1 defeat before a Lionel Messi inspired Barcelona came away from London with a resounding 4-2 victory, leaving Spurs pointless and bottom after the first two matchdays. Anything but a victory could already all but seal Spurs’ fate, which would be a massive disappointment. Pochettino will have to do it without Dele Alli, who is injured, and Christian Eriksen, so key to how Spurs play, is also a doubt too.

In the way are PSV, who are enjoying a magnificent start to the domestic season. After nine games, dominance has been imposed and Mark van Bommel’s side have nine wins, smashing in 36 goals and conceding just three to boot. No one in the league has scored more than duo Hirving Lozano and Luuk de Jong, who already both have eight goals.

Obviously, retaining the Eredivisie would equate to success, but for such a powerful club in the Netherlands the ambition is to be successful in Europe. Getting out of the group, and an absolute group of death by the way, would represent massive success. Especially after being pointless from the first two matches.

Both these sides simply have to win to have any chance of making it out of the group. Both try to play football on the front foot with tempo, so it should be a wonderful game in the making.

PSV vs Tottenham Hotspur will be televised live in the UK on BT Sport 3 with kick-off at 17:55.

Odds and markets last updated on Wednesday 24th October 2018 @12:34 GMT. Keep checking back to see if there’s any updates to markets – the time stamp in the previous sentence for when we update tips on this page will be updated.