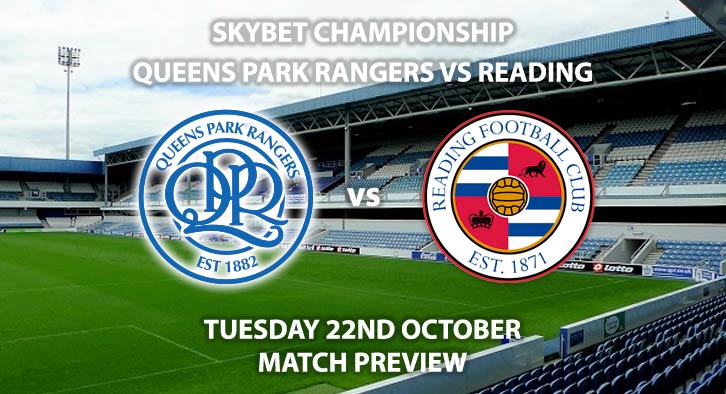 QPR have had a very inconsistent start to the season but will not be complaining as they sit 5th in the Championship table. Their 3-2 victory against Hull on the weekend was rather dramatic but two penalties from Eberechi Eze saw them take all three points.

The visitors are under new management in Mark Bowen and won their weekend match with a last gasp 90+8thminute winner. The Royals are still in dire need of three more points as they are sitting deep in the bottom half of the table.

QPR are priced at 19/20 to win on SkyBet. The London outfit are proving to be a handful for Championship defences and no-one more than Nahki Wells. The striker has 6 goals so far this season and is priced at 7/2 to score the first goal on Tuesday night. Eberechi Eze has equalled Well’s goal scoring feat and is the same price to bag the first goal.

Whilst the hosts are sitting in a comfortable position, they have had some defensive problems with a goal difference of 0, despite their 5th placed standing. SkyBet are offering 15/8 for QPR to win and both teams to score.

Reading are priced at 14/5 to win the match. As aforementioned, they won their previous match against promotion hopefuls Preston in the dying moments. Despite showing great character at times, they do lack quality and balance in their squad. QPR will test them with their exciting, free-flowing attack.

No-one in the team has proved themselves to be the main goal scorer but all eyes will be focused on George Puscas up front. The striker has only scored a couple goals this season but is getting into good attacking positions from crossed. He is priced at 21/10 to end his frustrating goal drought – something that will happen sooner rather than later.

The referee for this match will be Jeremy Simpson. The official has not been shy reaching for his pocket this season. He has averaged 39 booking points in England’s second division.

The match will be televised on Sky Sports Main Event and kicks off at 19:45 BST.

The hosts have too much quality and star power going forward – something the visitors lack.