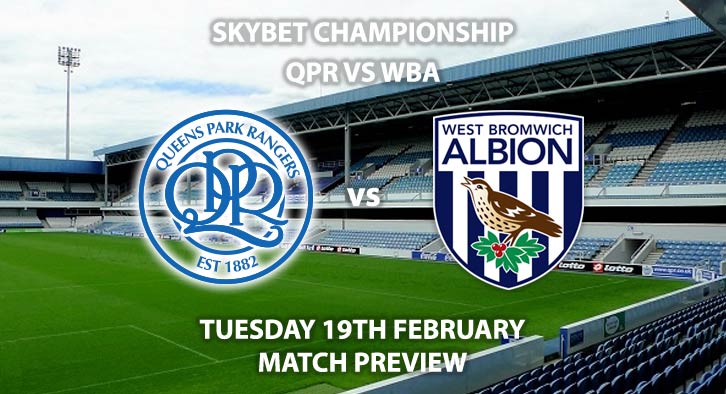 The hosts will be hoping that the home crowd can give them a boost and get them out of their bad form. They have lost six of their last eight matches in all competitions. Meanwhile, the visitors will want to continue climbing after their 2-0 victory away at Aston Villa last time out.

The last time these two met, it produced goals galore. West Brom were rampant in the second half and won 7-1. SkyBet aren’t even offering a market on that score line, however 6-1 is priced at 250/1 in either teams’ favour.

QPR are priced at 21/10 to win on Tuesday night by SkyBet. The home side have had an awful start to 2019, picking up just one point on New Years Day. That is the worst form in the whole of the EFL. That being said, Matt Smith has been making a name for himself at the spearhead of the QPR attack. The striker has scored three goals in his last two league matches and is 6/1 to score and for his side to win.

West Brom are slightly lower odds at 6/5 – and tempting odds at that. The Baggies have continued their scoring form and are second highest in the league – one behind league leaders Norwich. They have managed to score in all of their last 16 matches in the league and pivotal to that record is striker Jay Rodriguez. The attacker has 17 gaols for the season and is price boosted at 3/1 to score and his team to win the match. Dwight Gayle is suspended for the match.

Their defence has also improved as they have not conceded a goal on the road for a total of 392 minutes.

The referee for this match will be John Brooks. The official has averaged 44.6 booking points in his 12 Championship matches. It’s safe to say he isn’t shy with his cards. Over 50+ booking points are priced at 13/8.

QPR vs West Brom will be televised on Sky Sports Football HD and kicks off at 19:45.

– The visitors attacking strength will be the difference against an out of sorts defence.

Odds and markets last updated on Tuesday 19th February 2018 @18:17 GMT. Keep checking back to see if there’s any updates to markets – the time stamp in the previous sentence for when we update tips on this page will be updated.