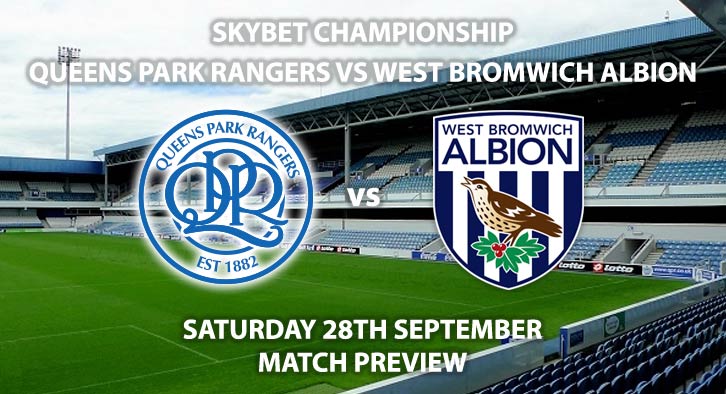 West Bromwich Albion look to extend their unbeaten Championship run to nine matches as they travel to The Kiyan Prince Foundation Stadium to face QPR on Saturday lunchtime.

Slaven Bilic’s side currently sit 4th in the current SkyBet Championship standings but come into this fixture as the most inform side in the division, having not yet been beaten in the league this season.

The Baggies are one of only five teams in the top four tiers of English football who have not been defeated so far this season. Themselves and Liverpool, Ipswich Town, Coventry City and Exeter City are the only remaining sides yet to lose.

Their opponents QPR have themselves enjoyed a strong start to the season and sit only a place below Albion in the league table. Rangers are unbeaten in their last four Championship encounters, winning all of them. Both teams go into this weekends clash level on points, and both only one point off Leeds United at the top.

In the combined total of sixteen league fixtures played by these two teams so far this season (8 each), BTTS has landed in fifteen. The one which didn’t was QPR’s 2-0 away defeat to Bristol City. Despite West Brom’s excellent opening to the campaign, it comes as somewhat of a surprise to learn that they have failed to keep a clean sheet to date, and that will be an area of concern for Slaven Bilic. BTTS in this fixture is priced at odds of ½ on SkyBet, which is no surprise.

The last two meetings between these two sides has produced an incredible thirteen goals. WBA hold the most recent bragging rights between the two, following their league double over QPR last season, defeating them 7-1 at home, before winning 3-2 away in February.

As you would imagine, I am expecting goals this weekend, and certainly expecting BTTS. With both sides strong opening to the season, and aspirations of promotion in May, both teams will be wanting to make a statement by grabbing a win. I don’t see it that way. I’m predicting a draw. And if so, it could be a big point come the end of the season…

This match will be broadcast live on Sky Sports football with kick off scheduled to take place at 12:30 BST.