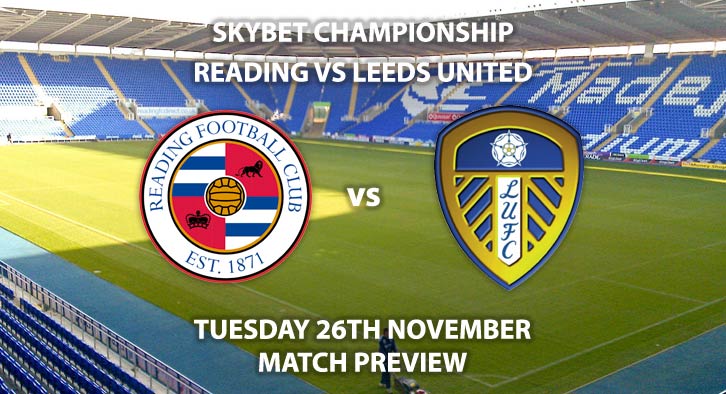 Reading return to home soil on Tuesday night as they welcome the arrival of Leeds United to the Madejski Stadium in the Championship.

Reading will be looking to return to their strong recent form after their weekend defeat to Brentford at Griffin Park. The Royals were beaten 1-0, their first loss under boss Mark Bowen. Bowen took over from Jose Gomes in October, and had previously steered Reading to three wins from their last four.

The visitors Leeds United will be expecting to continue their fine form on Tuesday night, and look to turn their pursuit of a return to the Premier League into a reality. Marcelo Bielsa’s side needed a stoppage time winner to overcome a spirited Luton Town on Saturday, as they ran out 2-1 winners thanks to the late goal. United are unbeaten in their last six league affairs, their last defeat coming to Millwall, at the beginning of October.

Leeds will be more than content with a repeat result from the last meeting between the two at the Madejski. United ran out 3-0 winners, which was the second leg of a league double over the Royals. Reading’s last win over Leeds came in October 2017 which was as Elland Road, but their wait for a home win is even longer, with their last in the April of 2017. Leeds have lost only once away to Reading in six years.

The referee for this affair is Darren Bond. Bond is yet to take charge of a match involving Reading so far this season, but did oversee Leeds home defeat to Swansea, where he brandished four yellow cards. Bond has officiated ten Championship encounters so far this season, accumulating a total of 36 yellow cards along with one red. This considered, I would recommend a minimum of 30+ booking points for this clash.

This game will be televised live on Sky Sports Football, with kick-off scheduled to take place at 20:00 BST.