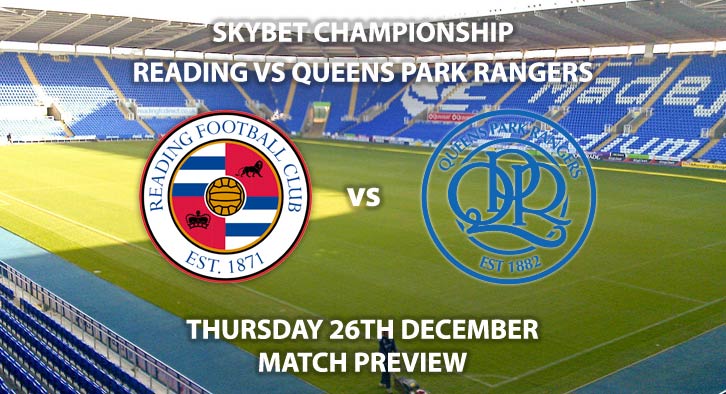 Reading return to the Madejski for the second time in a week when they welcome QPR for some Boxing Day Championship action.

The Royals will be hoping for another positive result to extend their unbeaten run in the Championship. Reading are unbeaten in their last three and have lost once in their last five league encounters.

QPR on the other hand were pegged back late on by Charlton Athletic in their last Championship affair. QPR led twice but had to settle for a share of the spoils thanks to Mouhamadou Sarr’s 95th minute leveller. Mark Warbuton’s side are without a win in their last two matches and will be hoping to put that right on Boxing Day.

Since Mark Bowen’s arrival at Reading, it’s no secret that their form has improved. Since Bowen’s introduction, the Royals have lost four, drawn three and won five. Before his arrival, Reading had only managed two wins in their opening eleven matches of the season.

These sides last locked horns at the end of October and played out an entertaining 2-2 draw. Sam Baldock struck a late equaliser for Reading to ensure a share of the spoils at Loftus Road. It’s QPR who have the superior recent record in this fixture and have lost once in the last nine. Reading’s last win came in this fixture came in March 2018.

The referee for this encounter is James Linington. The Englishman has taken charge of eleven Championship matches so far this season and has awarded thirty-eight yellow cards and three red cards in these fixtures. This considered, I would recommend a minimum of 30+ booking points for this clash. Linington took charge of Reading’s 3-1 defeat to Sheffield Wednesday in August, where he awarded three yellow cards and a red card to Wednesday’s Kieron Westwood. Linington has also been in charge of a game involving QPR too; their 2-1 defeat to Fulham in November where one yellow card was brandished.

This match will be shown live on Sky Sports Football, with kick-off scheduled to take place at 19:30 GMT on Boxing Day.