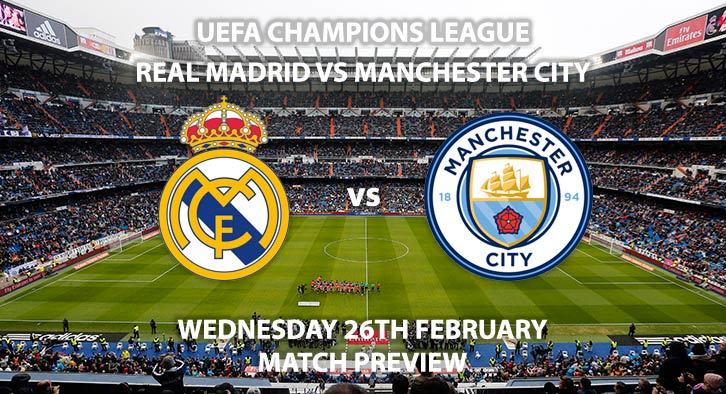 Real Madrid and Manchester City lock horns in the first leg of their Champions League Round of 16 tie on Tuesday night.

Some would argue this tie is the pick of the bunch for this stage of the competition, with both sides heavily backed to lift the trophy at the end of May.

Real Madrid come into this fixture second in Spain’s La Liga, two points behind leaders Barcelona and without a win in their last two league outings. Zinedine Zidane’s side were beaten 1-0 away to Levante on Saturday, and in the aftermath of that defeat it was confirmed that forward Eden Hazard is likely to miss the remainder of the season with an ankle injury.

Manchester City  reduced Liverpool’s lead at the top of the Premier League to nineteen points with a hard-fought win against third placed Leicester City on Saturday evening. Gabriel Jesus struck the winner late on for Pep Guardiola’s side, who’s focus is heavily on this competition following Liverpool’s sheer dominance this campaign.

Real Madrid finished 2nd in Group A behind PSG, and were defeated once in the group stage which came away at the Parc de Princes on the opening group night. Manchester City on the other hand finished top of Group C and ended the phase unbeaten with four wins and two draws from their six matches.

In the group stage alone, thirty-three goals were scored between these sides, so more goals are likely in on Wednesday evening. (Real Madrid – 17. Manchester City- 16). SkyBet are offering odds of 6/4 for over 3.5 goals for this encounter.

Manchester City have never won the Champions League, and their best finish in the competition came back in the 2015/16 season, where they were knocked out in the semi-final to Wednesday night’s opponents, Real Madrid.

Real Madrid vs Manchester City will be televised live in the UK on BT Sport 1 with kick-off at 20:00 GMT.