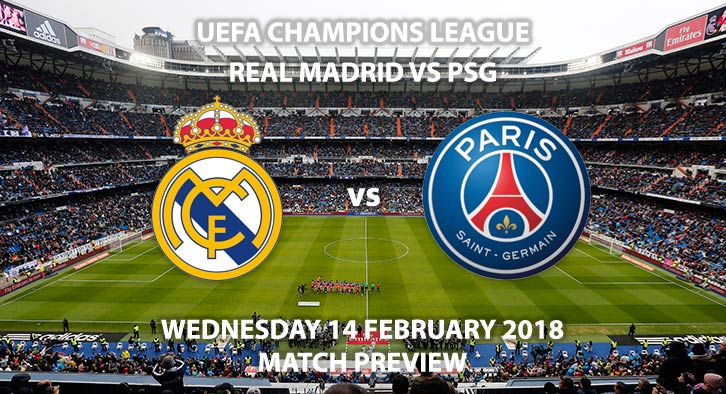 Real Madrid vs PSG – Defending Champions Real Madrid take on PSG at the Bernabeu in the first-leg of their Champions League knockout tie.

After a disappointing domestic season, Madrid will be looking to restore their reputation in Europe. Sat in fourth, the reigning league champions sit 17 points behind Barcelona. With the league title long gone, their main focus has to be trying to catch second-placed Atletico Madrid, who are currently ten points ahead of them.

Despite struggling for most of this term, Zinedine Zidane’s sides’ form has improved recently, with four wins in their last six matches. With 12 goals in their last two home games, it isn’t goals that will dictate Madrid’s future in this competition. With Raphael Varane and Sergio Ramos both struggling with injuries, Los Blancos have conceded 23 goals in 22 games. Whilst this doesn’t seem a bad return, it is three more goals than Barcelona and Atletico combined.

Cristiano Ronaldo’s league form has been under much scrutiny this season. The Portuguese forward has 11 goals this season from 18 games; a much lower return than previous seasons. In the Champions League, however, the former Manchester United forward has been in scintillating form. With nine goals from six games, Ronaldo has etched his name into Champions League history again this season. No player had previously scored in every group stages game before the five-time Ballon d’Or broke the record back in December last year.

Many will feel that PSG come into this game as favourites, despite facing the reigning Champions. Unai Emery’s side topped their group, collecting 15 points and beating Bayern Munich in the process. Having assembled one of the most expensive forward lines in history, it is little surprise to see Les Parisiens top of the goalscoring charts. With Edinson Cavani now joined by Kylian Mbappe and Neymar in attack, there is no defence in the world that wouldn’t be nervous about facing this potent trio. With 69 goals between the three in all competitions, PSG look like serious contenders for this competition and could make a real statement by toppling the reigning Champions on their own turf.

Gianluca Rocchi has been appointed as the referee for this crucial clash. The Italian has officiated ten games in Serie A this season, with an average of 4.9 cards per match. He has shown 46 yellow cards and two red cards this season, so booking points could be a good bet to go with.

With the amount of attacking talent on display on Wednesday night, it’s impossible to not predict goals. I think, despite their poor domestic form, Real Madrid will come out on top. Whilst PSG have been very impressive this season, the biggest players show their true ability in the biggest moments and I think Madrid will secure a crucial victory.

Real Madrid vs PSG will be televised live in the UK on BT Sport 3, with kick off at 19:45 GMT.