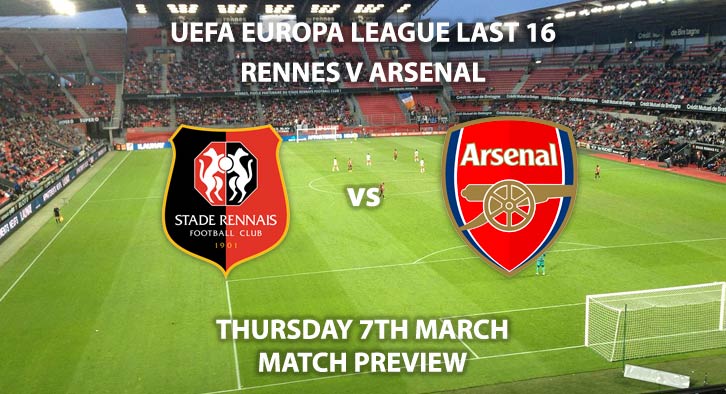 Arsenal’s venture in the UEFA Europa League continues as they travel to Rennes in the 1st leg of their Round of 16 tie.

The home side have made hard work of their European campaign as they scrapped through the group stages. However, they got the better of Spanish side Real Betis in the last round to earn their place in this round. Arsenal also didn’t make it straight forward. Unai Emery’s side needed a second leg routing to qualify after losing their first leg in the last round to BATE Borisov.

Rennes are the under dogs for this tie despite having home advantage and SkyBet have priced them at 11/4 to win. The French outfit enter this match in some nice form. They have lost just two of their last ten matches and their last outing saw them progress to the semi-finals of the Coupe de France. One man who has been key to them with his tricky feet and eye for goal has been ex-Newcastle United midfielder Hatem Ben Arfa. The Frenchman will be the main threat against Arsenal and is 13/5 to score anytime.

Arsenal are priced at 1/1 to win this match. Unai Emery will fancy his chances of leading Arsenal all the way to the final of this competition. Their away record in the Europa League is impressive, having not lost their last 12 matches away in France. Striker Pierre-Emerick Aubameyang will be hoping he can add to his impressive season tally with a goal this Thursday. The striker is 11/8 to score anytime.

Last season in this competition, five of Arsenal’s eight knockout matches saw three goals or more. SkyBet are offering 2/1 for Arsenal to win and over 2.5 goals in the match.

The referee for this match will be Slovakian official Ivan Kruzliak. Both the clubs last competitive match saw over 60 booking points. I’d expect some cards in this match.

Rennes vs Arsenal will be televised live in the UK on BT Sport 2 HD and kicks off at 17:55.

– This shouldn’t be a tough match for the visitors who have too much quality.

Odds and markets last updated on Thursday 7th March 2019 @11:10 GMT. Keep checking back to see if there’s any updates to markets – the time stamp in the previous sentence for when we update tips on this page will be updated.