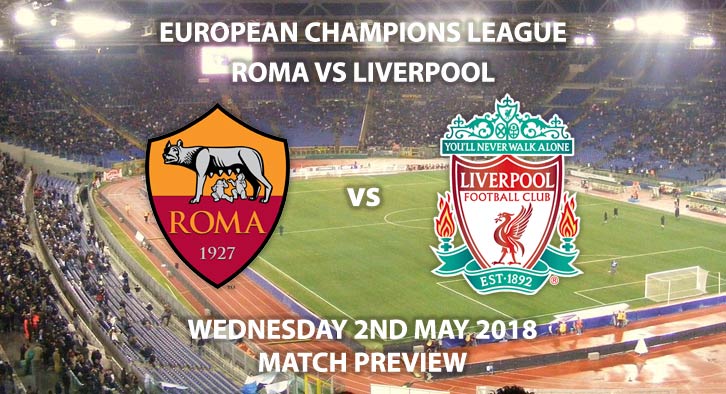 Roma vs Liverpool – Liverpool face a trip to the Stadio Olympico to face Roma in the second leg of their Champions League semi-final tie.

The Reds 5-2 victory over La Lupa last week helped them place on foot in the final of this year’s competition. Goals from Mohamad Salah, Roberto Firmino and Sadio Mane did the damage as Jurgen Klopp’s side raced into a five-goal lead. However, in true Liverpool fashion, the Reds failed to see the game out, conceding two late away goals and gifting Roma an avenue back into the tie. After their famous 3-0 fightback in the last round against Barcelona, Roma need the same result again to progress. Keeping Liverpool out at the other end, however, is a task that many have failed with this season. There’s no doubt Liverpool will have chances to grab themselves an away goal, or two. Should they nab one, on the counter-attack then they should see themselves through.

Liverpool rested men at the weekend in preparation for this crucial game. As a result, they stuttered to a 0-0 draw with Stoke, leaving them still sweating on a top-four finish. They hold a six-point lead over Chelsea but have played a game more. They must also travel to Stamford Bridge before the season is out. Should Chelsea win both those games, they would be level on points with Klopp’s side.

Roma responded to their defeat with an emphatic 4-1 victory over Chievo. The result keeps them in third place, level on points with Lazio. After scoring at Anfield, Edin Dzeko continued his fine form in front of goal with another brace. That took his tally for the season to 25 including six goals in his last eight games.

Damir Skomina will be the referee in Rome. The Slovenian has officiated six games in Europe this season, issuing 38 yellow cards and 0 reds. This averages at 63.3, which is extremely high. As a result, I would advise a maximum booking points total of 30+ each time.

Interestingly, Liverpool have a 100% losing record in matches officiated by Skomina. However, I think that run will end on Wednesday night. The Reds showed in the first-leg their ability to hurt Roma and on the counter-attack, I think they could be even more dangerous.

Roma vs Liverpool will be televised live in the UK on BT Sport with kick-off at 19:45.