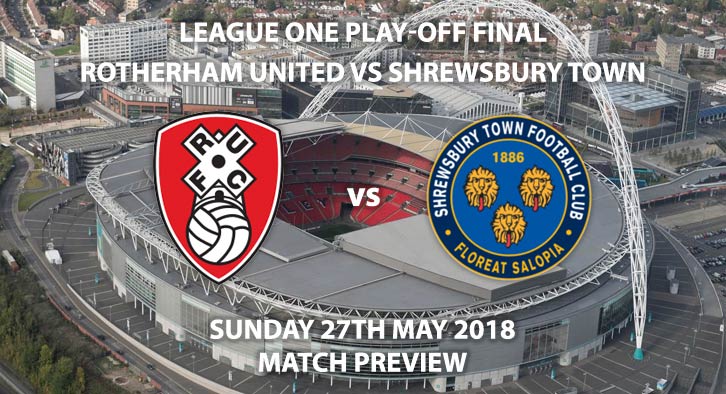 Rotherham vs Shrewsbury – Rotherham United and Shrewsbury head to Wembley in the SkyBet League One play-off final. Both sides had to fence off tough opponents in the semi-finals with Rotherham seeing off Scunthorpe and Shrewsbury eliminating Charlton Athletic.

Rotherham United have a very strong season in League One with the third highest goal tally in the league. Kieffer Roofe has led the line with great aplomb, netting 13 league goals along the way. SkyBet are fancying them to lift the trophy at the price of 3 / 4. The Millers have made the New York Stadium a fortress in recent months and were the second strongest home side all campaign however difficulties have arose on the road. They accumulated a total of 48 points at home and 31 away from home. It is a possibility that Wembley prove too much for the homesick Rotherham.

Paul Warne’s side have averaged two or more goals in 41% of their League One matches this year. SkyBet are offering odds of 11/8 for this to once again occur, but this time under the Wembley arch. A downside to Rotherhams fast-paced, clinical approach is their sensitivity at the back. They shipped 53 goals during the regular season; the most in the top six.

Also, they haven’t been shy with the referee’s pocket with an average of 17.4 booking points and a play-off final often sees sparks fly. SkyBet seem to be offering a banker with Rotherham to get 20+ booking points at a very reasonable 4/5.

Shrewsbury have exceeded many expectations this season with a third place finish in the standings. They then continued that impressive run by defeating Charlton Athletic in both semi-final legs to earn their Wembley place. SkyBet are fancying them to go all the way and reach the Championship with a price of 5/4.

Their attack has been slightly less provocative than their Sunday opponents’, however effective nonetheless. ‘The Blues’ netted 60 goals over the season with Stefan Payne enjoying the limelight with 11 crucial goals. Shrewsbury also have shown a lot more bottle away from home with 41 points earnt and 28 goals scored. They have averaged two or more goals per game in 36% of their league outings and SkyBet are offering a price of 21/10 for them to do it once more.

Defensively Shrewsbury have been role-models for the rest of the league. They conceded only 39 goals in their 46 campaign matches; the second best tally in the league. Their defensive efforts have not come at much of a price either having averaged 15.1 booking points throughout the season. SkyBet are pricing them to receive 20+ booking points at 4/7. Not bad for a RequestABet.

The referee for this encounter will be Robert Jones. Jones has officiated in League One ten times this season and hasn’t been shy with his cards. He has averaged a total of 37.5 booking points.

Rotherham vs Shrewsbury will be televised in the UK on Sky Sports Football HD with kick off at 15:00 GMT.